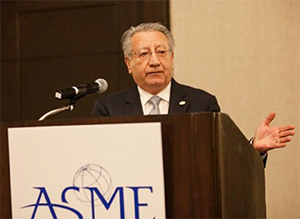 ASME President Said Jahanmir marked the midpoint of his yearlong term with his speech at the President’s Luncheon at the ASME 2018 International Mechanical Engineering Congress and Exposition in Pittsburgh, Pa.

ASME President Said Jahanmir touched on a number of topics at the President’s Luncheon at this year’s International Mechanical Engineering Congress and Exposition (IMECE). During his speech, which took place on Nov. 12 at the Westin Hotel in Pittsburgh, Pa., Dr. Jahanmir discussed his view of ‘the ASME family,’ the Society’s focus on technology, and the importance of sharing a common vision.

After acknowledging the work of the Board of Governors, ASME volunteers and staff to help the Society fulfill its mission and meet its strategic objectives, Jahanmir addressed his concept of ASME as “a family that works together to achieve great things” —  a notion that he first expressed at the ASME Annual Meeting in June.

“Today I want to emphasize what it means to be in the ASME family — as a place of ideas, sharing a common vision, driving us toward a future that is better, safer and more resilient,” Jahanmir said. “Families — of all ages, talents, and opinions — are at their best when they share common goals to make us stronger, help us grow, and support us as we try to do our best. And at the end of the day, family gives us a place to return to, at times of need and at times of celebration.” 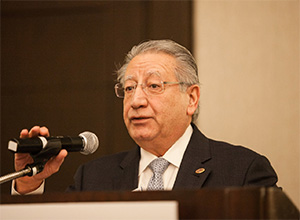 Said Jahanmir discussed topics including his concept of ‘the ASME family’ and the Society’s focus on technology during his speech at the President’s Luncheon on Nov. 12.

Jahanmir went on to talk about ASME’s focus on technology and the variety of programs and products being developed by the Society — including new courses from Learning & Development, standards for emerging technologies from ASME Standards & Certification, and the addition of new technology-oriented sessions at ASME division conferences — that support that new focus.

“As a whole, we are a technology-based family,” Jahanmir said. “That helps us learn and expand into new areas, accelerates growth of technology, leads to new and stronger partnerships and collaborations, and provides solutions to make the world a better place.”

On the subject of the five core technologies that the Board of Governors had identified as key to the Society’s overall strategy — manufacturing, bioengineering, clean energy, robotics and pressure technology – Jahanmir added that ASME was making significant progress and had begun integrating these strategic priorities into the Society’s organizational structure this year. “We have tremendous opportunities ahead for synergy among all ASME units,” he continued. “We want divisions, sections, code committees, government relations, and all other units of ASME to better relate to these priorities. We want to know how we can best work with new partners, alliances, and joint ventures to move forward.” 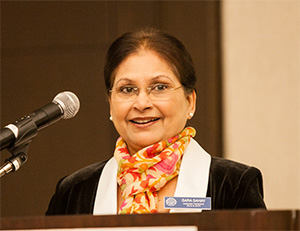 Saraswati Sahay, president of the ASME Auxiliary, discussed the commemoration of the Auxiliary’s 95th anniversary this year during her report at the President’s Luncheon.

Jahanmir went on to note the fundamental importance for professional families to share a common vision. “ASME’s is to be the essential resource for the global engineering family,” he said. “Our mission is to promote and advance engineering knowledge to improve the quality of life. This is what guides us.” In order for ASME to succeed, he said that every ASME unit should take part in the Society’s mission-related efforts and, when doing so, should ask themselves how they can work together to identify developing technology trends and how they can help ensure that ASME continues to be the “go-to” resource for technology-related challenges in the future.

Earlier in the luncheon, Saraswati Sahay, president of the ASME Auxiliary, took the stage to commemorate the 95th anniversary of Auxiliary, which was formed in 1923 to support students who were pursuing careers in mechanical engineering. Sahay also discussed the various scholarships that are offered by the Auxiliary, including scholarships for undergraduate and graduate students as well as its Lucy and Charles W.E. Clarke Scholarship for high school seniors who participate in the FIRST Robotics Competition. Over the past 40 years, the Auxiliary has awarded nearly $3 million dollars of financial support to more than 1,300 students, she said. 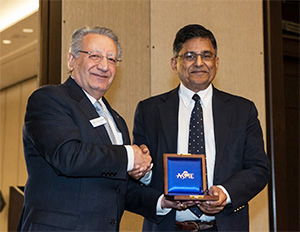 ASME President Said Jahanmir (left) presents the Soichiro Honda Medal to Ashwani K. Gupta of the University of Maryland during the awards presentation at the President’s Luncheon. The medal is given in recognition of an individual’s outstanding achievement or a series of significant engineering contributions in developing improvements in the field of personal transportation.

The other honorees recognized during the event were Todd R. Allen of Allen Research Tech-Services Inc., who received the Henry Laurence Gantt Medal; Awatef A. Hamed, Ph.D., of the University of Cincinnati, who accepted the Kate Gleason Award; Stephen P. Engelstad, Ph.D., from Lockheed Martin Aeronautics Co., the recipient of the Spirt of St. Louis Medal; Martin Ostoja-Starzewski, Ph.D., of the University of Illinois at Urbana–Champaign, who received the Worcester Reed Warner Medal; Jaikrishnan R. Kadambi, Ph.D., from Case Western Reserve University, the winner of the Henry R. Worthington Medal; and Robert M. Wagner, Ph.D., of Oak Ridge National Laboratory, who accepted the McDavid Mentoring Award.

Applications Due Soon for ASME Scholarships