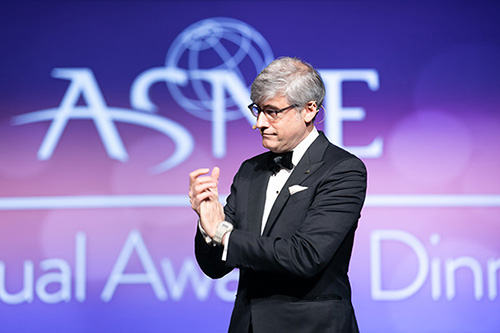 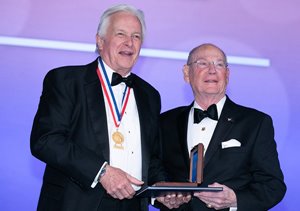 ASME President Richard Laudenat (left) presents Past President Reginald Vachon with the Society’s highest award, the ASME Medal, at the ASME Annual Awards Dinner.
This year’s International Mechanical Engineering Congress and Exposition (IMECE) featured an exciting new special event intended to entertain attendees of the conference and celebrated the contributions of some of the engineering profession’s best and brightest.

The 2019 ASME Annual Awards Dinner: Celebrating Engineering Achievement was held Nov. 11 at the Calvin L. Rampton Salt Palace Convention Center in Salt Lake City. The event featured an array of performers who provided entertainment for the dinner’s attendees. Hosted by special guest master of ceremonies Mo Rocca, a correspondent for CBS News and the host of the network’s The Henry Ford’s Innovation Nation, the festivities also included performances by 11-year-old violin prodigy Karolina Protsenko and 2016 “America’s Got Talent” finalist Sal “The Voice” Valentinetti, who performed selections from the Great American Songbook with the No Vacancy Quintet. Diners were given the chance to witness the skills of speed-painting virtuoso Dan Dunn’s PaintJam, whose work was auctioned off at the end of the evening, with proceeds benefiting the ASME Foundation. 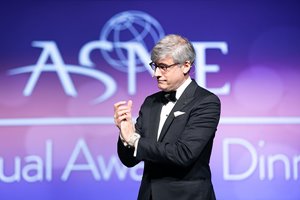 Mo Rocca, CBS news correspondent and host of The Henry Ford’s Innovation Nation, was the special guest master of ceremonies for the event.
One of the night’s honorees, ASME Past President Reginald I. Vachon, received ASME’s highest award — the ASME Medal — during the awards dinner. Dr. Vachon received the award in recognition of his contributions to the development and commercialization of an innovative strain measurement technology. That technology optically monitors a scalable strain gauge to measure strain, cold working, crack initiation and structural health.

Dr. Vachon, who was met with a standing ovation as he took the stage, quoted poet Henry Newbolt as he accepted the award, which honors eminently distinguished engineering achievement. “ ‘To set the goal above renown, to love the game beyond the prize,’ ” recited Vachon, an ASME Honorary Member and Fellow who served as president of ASME in 2003-2004. “This is in the phrase over the student union building at Iowa State. And I think it describes the engineer. We love the game beyond the prize. I adopted that philosophy many years ago.” 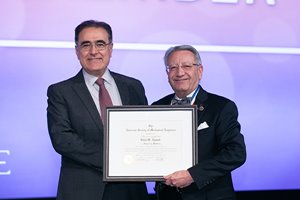 Bilal Ayyub (left), who was named an ASME Honorary Member at the Annual Awards Dinner, with immediate ASME Past President Said Jahanmir.
After thanking his family members, many of whom were in the audience, Vachon went on to express his appreciation to his friends, teachers, students and colleagues for their support during his distinguished career. He also thanked ASME, the Committee on Honors and Past President Harry Armen, who nominated him for the award. “Believe me when I say, it is humbling,” he said. “There are so many people that have achieved and to be ranked with them is an honor I will not forget.”

Another of the night’s honorees, Bilal M. Ayyub, was one of three engineers who were named Honorary Members of ASME during the dinner. First awarded in 1880, the founding year of the Society, Honorary Membership is awarded for a lifetime of service to engineering or related fields such as science, research or public service. 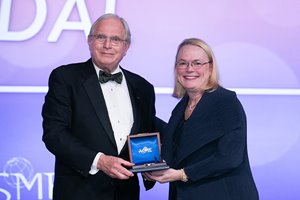 ASME President-Elect Bryan Erler (left) presents the Henry Laurence Gantt Medal to Margaret McCullough of Bechtel during the awards dinner.
Dr. Ayyub, professor and director of the Center for Technology and Systems Management at the University of Maryland in College Park, was recognized for distinguished leadership and contributions in risk analysis for the protection and lifecycle management of infrastructure systems using quantitative methods.

“When I started my career, I really wanted to achieve two things,” Ayyub said. “One was to be learned and knowledgeable. Second was to enhance the quality of life. And I have a mixed report. On the knowledge front, the more I learn, the more I realize how little I know…. In enhancing the quality of life, I don't think we are close to achieving a sustainable and equitable society. That’s a big challenge. My hope is in the students — the future — who will be able to deal with this challenge and maybe we’ll set the basis for them through education.”

Two other engineering leaders were also promoted to the level of Honorary Membership during the event. Amir Faghri, distinguished professor of engineering and distinguished dean emeritus of engineering at the University of Connecticut in Storrs, was honored for seminal and extensive scientific and engineering contributions in the fields of heat transfer and thermodynamics as an author, educator and inventor; and for academic leadership. D. Yogi Goswami, distinguished university professor at the University of South Florida in Tampa, was recognized for distinctive and pioneering contributions in the fields of solar energy and renewable energy sources, for his efforts to advance the progress of sustainable energy policies worldwide, and for his lifelong leadership and service in the engineering profession.

Special recognition was given during the event to Michael Merker, who spent nearly 40 years as an advocate for ASME codes and standards. Merker, who joined the staff of ASME in 1981 and served as associate executive director of Standards and Certification from 2015 until his retirement in 2018, received the Melvin R. Green Codes and Standards Medal during the dinner. The award recognizes contributions to the development, promulgation or management of documents, objects or devices used in ASME programs of technical codification, standardization and conformity assessment.

“I want to thank the professional staff, the dedicated volunteers and also the other standards developing organizations which we work with,” including the American Petroleum Institute and ASTM, Merker said as he accepted the award. Although sometimes seen as competitors, the various organizations also work together, he noted. “It’s the commitment to bettering the health, safety and welfare of the general public that is really what draws us together,” he continued. “It’s a commonly shared mission.... There are tens of thousands of people alive in this country and around the world today because of the work done by standards professionals.”

Nobel Laureate and former U.S. Secretary of Energy Steven Chu was named the first recipient of the Richard J. Goldstein Energy Lecture Award during the event. The new award, named in honor of the Society’s 115th president, recognizes pioneering contributions to the frontiers of energy engineering science and technology including energy policy and environmental impact. Chu, the William R. Kenan Jr. professor of physics and professor of molecular and cellular physiology at the Stanford University School of Medicine in California, was honored for visionary stewardship of clean energy technologies, policy and innovation that have had a profound national and global impact.

The other engineering leaders honored at the event included Margaret G. McCullough, senior vice president and the general manager of nuclear security and operations at Bechtel, who received the Henry Laurence Gantt Medal for distinguished achievement in management and for service to the community; Kevin G. Bowcutt, a principal senior technical fellow and chief scientist of hypersonics at The Boeing Company, who received the Spirit of St. Louis Medal is awarded for meritorious service in the advancement of aeronautics and astronautics; and Sandy Karam, a recent graduate of Notre Dame University-Louaize in Lebanon, was the recipient of the Charles T. Main Student Leadership Gold Award for leadership and service qualities that have contributed to the programming and operation of an ASME student section for more than one year.

The winners of two “People’s Choice” poster awards were also announced during the ASME Annual Awards Dinner. IMECE attendees selected Fatime Esmailie of the University of Utah and Tonoy Chowdhury of the University of North Texas after viewing the poster presentations on the exhibition floor.