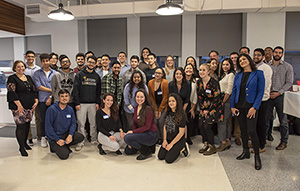 Last month, students from several universities in New York, New Jersey and Connecticut came together in New York City to network and learn about the various programs ASME has developed for engineering students and early career engineers during a special ASME Connect event that was held at the Society’s 2 Park Avenue headquarters. 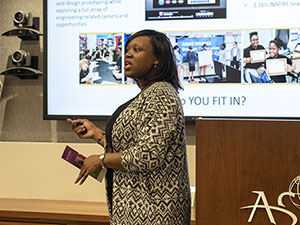 Following opening remarks from ASME Executive Director/CEO Tom Costabile and organizers Alayon and Russo, several staff members gave a series of short presentations designed to provide attendees with an overview of the many programs and events that are available to engineering students and early career engineers through ASME. These initiatives include the Engineering 4 Change (E4C) Research Fellowship program, the Society’s K-12 outreach activities including the ASME INSPIRE digital STEM education course, the ASME Scholarship Program, ASME Engineering Festivals™ (E-Fests) and ASME EFx™ events, and FutureME activities for early career engineers such as the Social Meet-Up and Mini-Talks programs. The students were then offered guided tours of ASME headquarters. The program concluded with a lively mixer where students had the opportunity to interact with each other and talk one-on-one with staff. 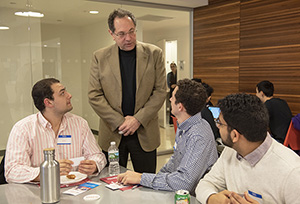 ASME Executive Director/CEO Tom Costabile (second from left) visits with a group of students from New Jersey Institute of Technology during the mixer at the ASME Connect event at ASME headquarters. (Photo by Wil Haywood, Strategic Communications)
ASME student member Anisha Cartagena, a senior and secretary of her student chapter at City Tech, was particularly impressed by her ASME Connect experience that day. “It was really great,” she said. “I came here to learn more about the different opportunities and I found about the fellowship that you offer through Engineering for Change and handed in my resume to see if I could join. I learned about E-Fest and EFx, which is happening right across the street from my school in a few weeks. I also learned about the Future ME program for people who are graduating. I think that is very important because of the networking connections. Things can get really competitive when you’re looking for jobs in the field.”

Harris Paspuleti, an ASME student member and sophomore at Cooper Union, was similarly enthusiastic about the event. “Our ASME chapter at Cooper Union is pretty small, so we have a lot of trouble reaching out to members of the mechanical engineering community in the New York City region,” said Paspuleti, who attended with two students from his university. “Coming to this event really felt like we were part of something bigger, though. Now that we know about all of the resources — the scholarships, competitions and events — we can go back to our school and encourage more people to be part of this organization.” 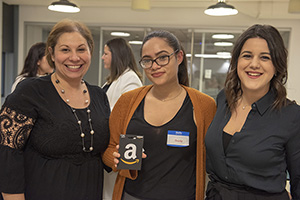 The next ASME Connect event will be held April 9 at the Rayburn House Building in Washington, D.C., in conjunction with several other ASME activities, including the 16th Annual Engineering Public Policy Symposium, the ASME Board of Governors meeting and an ASME Congressional Briefing.

Presenting the events concurrently with existing conferences or activities will be a key element of the ASME Connect model as the program expands, according to Alayon, citing the event at IMECE as an example. “At IMECE, all the ASME members the students would want to meet were there already,” she said. “There was a Board of Governors meeting planned. Our senior vice presidents were already there. ASME staff, the executive director/CEO, and even ASME past, present and future presidents were there. All we had to do was invite the students from Carnegie Mellon and the University of Pittsburgh to join in.”

For more information, or to register, for the ASME Connect event in Washington, D.C., visit www.eventbrite.com/e/asme-connect-dc-tickets-55254795581. To learn more about the ASME Connect program, contact Karen Russo at RussoK@asme.org.

Learning and Development for Engineers