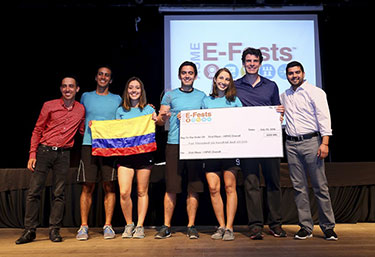 The team from Universidad de los Andes, Bogota, was named the overall winner of the ASME Human Powered Vehicle Challenge (HPVC) at ASME E-Fest South America in Brazil. The team placed first in the design category, the men’s and women’s speed races, and the endurance event.

ASME’s inaugural Engineering Festival (E-Fest) in South America, which was held July 27 to 29 in Rio de Janeiro, Brazil, marked another high point for the E-Fest program, drawing more than 500 participants from across South America and Mexico. The three-day ASME E-Fest South America, which was held at Universidade Federal do Rio de Janeiro (UFRJ), encompassed a variety of engaging activities, including a daily internship fair, a student leadership training session, tours of the UFRJ campus, networking opportunities, a keynote session featuring speakers from Stratasys and Hyperloop, presentations from industry leaders such as National Instruments, ANSYS and Altair, as well as several student competitions.

A team of students from Universidad de los Andes, Bogota, was the big winner at one of those competitions, the ASME Human Powered Vehicle Challenge (HPVC). The team, which was named the overall winner of the three-day competition, also took top honors in each of the competition’s main categories: the men’s and women’s speed events, the endurance race, and the design category. 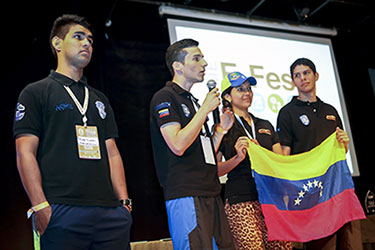 While Universidad de los Andes’ dominance during the HPVC in Brazil was hard to ignore, perhaps the biggest story at the E-Fest South America HPVC involved the team that placed second overall in the competition: Universidad del Zulia (LUZ). The team, which hails from Maracaibo, Venezuela, had the odds stacked against them just trying to make it to the E-Fest. The students, who had to start a fundraising campaign to participate in the competition, spent five days traveling to Rio de Janeiro, taking several buses, a couple of taxis, and a plane in order to reach the event. They even disassembled their bicycle and packed the pieces in their suitcases to save the expense of shipping it to the competition. Their spirit and determination paid off, though. In addition to finishing second overall, the team placed second in the design and women’s speed events and third in the men’s speed race. The teams’ members were also recognized for their efforts at the E-Fest South America awards ceremony.

“It was very important for us to come here because we wanted to show everybody, the entire world, that we could do it,” said Leonardo Gonzalez, a member of the LUZ team, adding that he hopes their story encourages students from other universities around the world to participate in the HPVC. “It was a great experience,” he said. 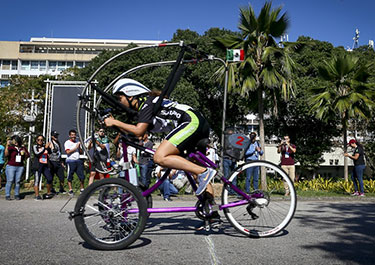 Two students from Escuela Politecnica Nacional in Ecuador also impressed the judges at the Old Guard Oral Presentation Competition at E-Fest South America. Marco Alejandro Carrion Salazar was named the winner of one of the competition’s first-prize awards, receiving $750, while a second student from the university, Andrea Alexandra Suntaxi, placed second in the competition and won the prize in the technical category. She won a total of $500. 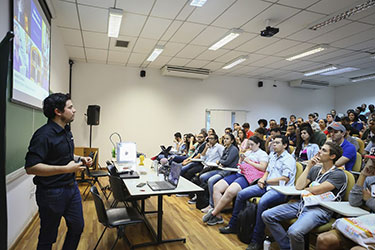 E-Fest South America offered students a wealth of learning opportunities, such as seminars on 3D printing and fluid dynamics simulation.
Three students were named the top prize winners at another student contest at the E-Fest, the IAM3D Impromptu CAD Battle. Victor Diz finished first in the competition, winning the $250 first prize. Fernando Garcia, a student from UFRJ, placed second and took home the $150 second prize. Mateus Martins rounded out the top three, receiving the $75 third prize.

There was much more to ASME E-Fest South America than student competitions, however. The E-Fest program in Brazil offered students a variety of training and skills-development opportunities as well. The event’s three-day schedule was packed with activities such as ASME Standards & Certification mini-courses, a session focusing on petroleum company Petrobras’ offshore wind energy initiatives, a workshop on engineering and data acquisition sponsored by National Instruments, a session on the digital revolution in Industry 4.0 sponsored by Radix, a session on fluid dynamics simulation hosted by ANSYS, a 3D printing seminar offered by Maker Factory, and a session exploring geometric-based topological optimization and analysis that was sponsored by Altair. 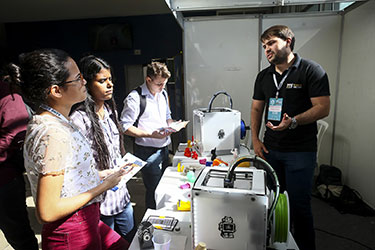 A representative from Maker Factory shares knowledge with students at the exhibits area at E-Fest South America.

Erik Larson, who led the session sponsored by Altair, was extremely impressed by the enthusiasm of the students attending E-Fest South America. Larson, a training manager at Altair who had previously participated in E-Fests in the United States, observed that while students in the U.S. tend to be used to people from industry talking to them at student conferences like these, “down here, the students are so much more engaged because I’m guessing I don’t think they get this kind of attention from organizations like ASME or Siemens or Altair or GrabCAD. They don’t see that, so they’re even more engaged down here. I think that’s really cool.”

For more information on the ASME E-Fest program, visit https://efests.asme.org.

Applications Due Soon for ASME Scholarships