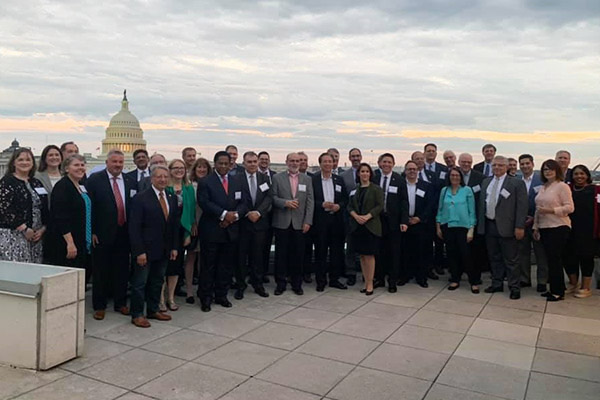 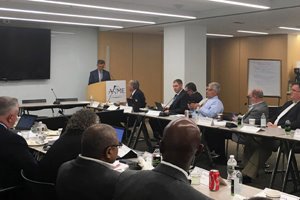 George Duchak (at podium), Deputy Assistant Secretary at the U.S. Department of Defense, was one of the guest speakers at the fall 2019 Industry Advisory Board meeting in Washington, D.C., in September.
Digital transformation, specifically how digital engineering concepts affect design, implementation and lifecycle management of mechanical systems, was the focus of the recent fall 2019 ASME Industry Advisory Board (IAB) meeting. The board considered the topic both in general and in the context of critical industries during the meeting, which was held Sept. 23-24 in Washington, D.C.

While speed of change and of adoption of new technologies will vary by industry and by nature of their business, the attendees had a lively discussion and agreed that there is no doubt that the digital transformation is underway and will substantively shape the future of mechanical engineering and related fields. 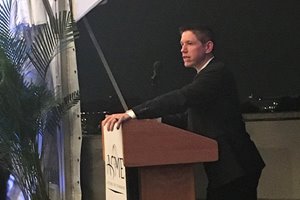 Thomas Hedberg, Jr., program manager in the Systems Integration Division at the National Institute of Standards and Technology, spoke at the opening dinner at the fall IAB meeting.
Several topics were discussed at the meeting, ranging from artificial intelligence and automation to customer intimacy and product quality (as deployed versus as designed). The identification and validation of the role and value of new technology was examined in detail throughout the meeting, which included a panel on current industry challenges moderated by IAB Program Chair Alex Hoffs and featuring IAB members Curt Lefebvre, founder and CEO of nDimensional; John Miller, senior vice president of Siemens Digital Industries Software; and Mark Palmer, distinguished scientist at Medtronic. The meeting also featured guest speakers from the National Institute of Standards and Technology, U.S. Department of Energy, and U.S. Department of Defense.

The majority of the panelists cautioned about beginning the process with data collection and ending with determining relevant technologies. They instead recommended starting with the value proposition and working toward understanding which type of data and analytics would support the overall business case. The group agreed that the objective must be defined based on the underlying problem or potential business opportunity. IAB members were encouraged to consider how digital transformation would allow their businesses to operate more efficiently by being able to connect various data streams in a more streamlined and consistent manner. 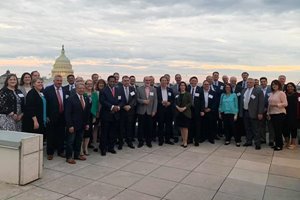 More than 40 Industry Advisory Board members, ASME staff and guest presenters (pictured here at the opening reception on Sept. 23) participated in the fall IAB meeting.
The meeting’s participants also debated the hurdles to adopting digital technologies and the expected value of their adoption. Many agreed that legacy systems are often inhibitors to deploying more modern data systems due to the cost of extensive conversion or technology deployment. For this reason, in applying digital transformation, small and medium-sized companies may have a competitive advantage over large companies due to their inherent flexibility. However, while small companies can be more innovative, their access to capital and resources may be restricted.

Utilizing its neutral convener status as well as its broader stakeholder base, several potential new opportunities were discussed for ASME, and ASME is currently considering the IAB feedback. Prior to the meeting, nine IAB executives participated in 22 Congressional visits with their House and Senate members or staff.

The IAB spring 2020 meeting will be held in mid-April 2020. For more information about the Industry Advisory Board, please contact Melissa Carl or Susie Cabanas in ASME Global Alliances and Board Operations.