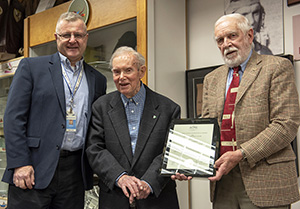 ASME’s History and Heritage (H&H) Committee recently recognized longtime ASME member Jack Connors with its 2018 Engineer-Historian Award for his book The Engines of Pratt & Whitney: A Technical History. Approximately 75 people — including Connors’ colleagues from Pratt & Whitney, members of the ASME H&H Committee and members of the ASME Hartford Section — attended the award presentation ceremony, which was held Oct. 25 at the New England Air Museum in Windsor Locks, Conn.

The ASME Engineer-Historian Award, which was established in 1990, recognizes outstanding published works by an engineer that deal with the history of mechanical engineering. The annual award is also intended to inspire mechanical engineers to take an interest in the history of their profession. Connors’ 500-page volume, which was published in 2009 by the American Institute of Aeronautics and Astronautics (AIAA), offers a comprehensive, detailed account of the evolution of aircraft engines at Pratt & Whitney.

In the book, Connors “not only provides us important insight into the engineering and business dilemmas the company faces, but also furnishes scholars with a reference work that will be of value for decades to come,” according to Lee Langston, the ASME H&H Committee member who presented the award to Connors at the ceremony.

Marty Ross, a corresponding member of the H&H Committee, offered further praise of Connors work, adding that "Jack has always been a big proponent for the preservation for both reciprocal and jet engine history in regards to Pratt & Whitney. His book is an accurate history of Pratt & Whitney engines as told by someone who lived it.”