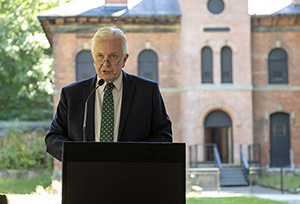 ASME President Richard Laudenat presented the ASME landmark plaque during the designation ceremony at the West Point Foundry on Oct. 5 in Cold Spring, N.Y. (Photos by Wil Haywood, ASME Strategic Communications)
ASME recently named the West Point Foundry, which gained prominence as one of the United States’ leading producers of capital goods during the 19th century, as the Society’s 272nd Historic Mechanical Engineering Landmark. The foundry, which employed hundreds of workers and became a renowned maker of cannons and other armaments from the years following the War of 1812 through the Civil War, was designated as an ASME landmark at a ceremony held Oct. 5 at the West Point Foundry Preserve in Cold Spring, N.Y. 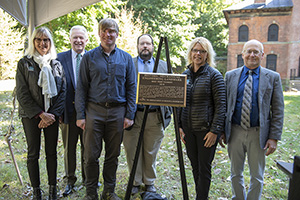 (From left) Rita Shaheen, Scenic Hudson parks and community engagement director; ASME President Richard Laudenat; nominator T. Arron Kotlensky; Steven Walton, H&H Committee; Scenic Hudson Sr. Vice President Erin Riley; and Mid-Hudson Section Chair Robert Marcinik.
In addition to cannons and other innovative artillery, the West Point Foundry produced the first U.S. locomotives, marine steam engines and a variety of manufacturing equipment for industry, according to the landmark plaque. The foundry, which was established in 1818 and became a training ground for many early mechanical engineers in the United States, is currently more intact than any of the other major industrial suppliers of capital goods from the early years of U.S. industrialization.

Following the Civil War, demand for the West Point Foundry’s wares diminished due to various factors including an economic downturn and increased competition, leading to the facility’s eventual closing in 1911. More than 20 years ago, Scenic Hudson established a preserve to maintain the remnants of the sprawling 90-acre complex, which is located 45 miles north of New York City. 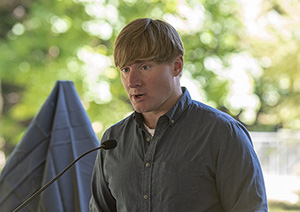 T. Arron Kotlensky, the industrial archaeologist and researcher who nominated the West Point Foundry for ASME landmark status, discussed the site’s historical significance during the designation ceremony.
“West Point Foundry Preserve is not only a beautiful park, but an outdoor museum that educates visitors about the early days of American industry and engineering,” said Laudenat, who presented the landmark plaque. “ASME is pleased to formally recognize the foundry’s historical significance as part of the American Industrial Revolution and the evolution of mechanical engineering, as well as its role in inspiring new generations of engineers.”

Since 1971, ASME has recognized 272 artifacts as historic mechanical engineering landmarks, heritage collections or heritage sites through the ASME History and Heritage Landmarks Program. To learn more about the program, visit www.asme.org/about-asme/engineering-history/landmarks/about-the-landmarks-program.