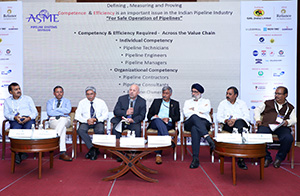 The ASME Pipeline System Division's India Group convened a successful India Oil & Gas Pipeline Conference (IOGPC) on April 26–27 at the Shangri La Hotel in New Delhi. The conference, which drew more than 300 attendees, was the largest IOGPC to date.

Speakers from pipeline industries primarily in India, France and the United States presented nearly 30 technical papers during the conference, which also featured two highly interactive panel discussions, 10 exhibitors and a record number of sponsor organizations — 24 in total — representing all key stakeholders in the sector.

The Indian government's standards and regulatory bodies were also well-represented with attendance from the Bureau of Indian Standards (BIS), the Oil Industry Safety Directorate (OISD), and the Petroleum and Natural Gas Regulatory Board (PNGRB). This representation, along with their counterparts in the private sector, allowed for a number of important networking opportunities during the two-day event.

ASME’s India Office — based in Gurgaon, near the capital city — was instrumental in planning, engaging volunteers and stakeholders, developing the program, and marketing and facilitating IOGPC 2019. To this end, ASME would like to recognize Madhukar Sharma, president of ASME India Private Limited, for his leadership, and Jaya Jain, business development head for Technical Events & Conferences, for her astute and diligent execution. They worked tirelessly to realize this successful event.

For more information on IOGPC and ASME’s operations and initiatives in India, please contact info-india@asme.org or Aaron Weinerman in ASME Global Public Affairs at WeinermanA@asme.org.