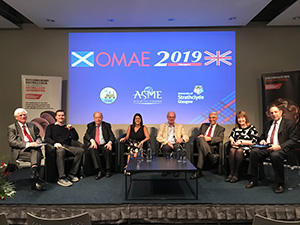 (Left to right) IMechE President Joe McGeough, Ruairi Armstrong, Ian Arbon, Valentina Alayon, member of the ASME Board of Governors Stuart Cameron, David Nash, Sandra Mulligan and ASME Executive Director/CEO Tom Costabile at the Roundtable Event.
Last month, representatives from ASME took part in two special events in Glasgow, Scotland, which were held in conjunction with the International Conference on Ocean, Offshore & Arctic Engineering (OMAE): a roundtable discussion on student and early career initiatives co-hosted with the United Kingdom’s Institution of Mechanical Engineers (IMechE) and an ASME Connect meet-and-greet with students from the University of Strathclyde.

During the ASME/IMechE Roundtable Event, which took place June 10 at the Scottish Events Campus, ASME Executive Director/CEO Tom Costabile and Board of Governors member Stuart Cameron met with IMechE President Joe McGeough and members of IMechE and ASME from the local area to discuss a number of topics, including key areas for future collaboration between the two organizations, the various student and early career activities and programs offered by ASME and IMechE, and the benefits that membership in professional societies like ASME and IMechE can provide young engineers. As a result of the discussion, ASME and IMechE have agreed to work together to develop a joint event for engineering students in Scotland to be held sometime in 2020. 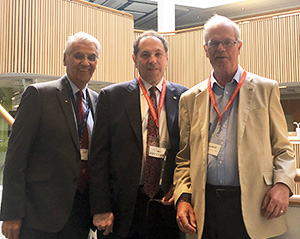 (Left to right) ASME and IMechE Fellow David Nash, ASME Executive Director/CEO Tom Costabile and member of the ASME Board of Governors Stuart Cameron during their tour of the Technology and Innovation Centre at the University of Strathclyde.
In addition to Costabile, Cameron and McGeough, participants at the Roundtable Event included Ian Arbon, an ASME Fellow and past chair of ASME’s United Kingdom Section; David Nash, a professor at the University of Strathclyde and a Fellow of both ASME and IMechE; Sandra Mulligan, IMechE’s business development coordinator; Valentina Alayon, coordinator, ASME Student and Early Career Engagement and Experience; and Ruairi Armstrong, a recent graduate of Strathclyde University who added an early career engineer’s perspective to the discussion.

Earlier that day, Costabile, Cameron, Nash and Alayon visited the University of Strathclyde, where they were given a tour of the campus and participated in an ASME Connect student outreach event. Approximately 25 students, primarily Ph.D. candidates, attended the meet-and-greet, where they were given an overview of the various programs and benefits ― such as scholarships, ASME Engineering Festivals™ (E-Fests), ASME EFx™ events and FutureME activities for early career engineers ― that are available to engineering students through ASME.