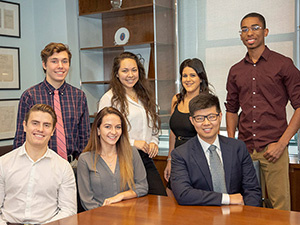 During their 10-week internships, the six students ― Brianna Migliaccio, a senior at New York University; Noah Ensslin, a sophomore at Stevens Institute of Technology; Kaelaan Maynor, a senior at the University of Hartford; Rosaura Ocampo, a senior from NYU; Sam Rappaport, a senior at NYU; and Xuezhi (Liam) Wang, a graduate student at Cornell University ― worked with various ASME groups to identify and develop opportunities that would enable the Society to better engage with engineering students and early career engineers. The new program was led and administered by ASME’s Executive Office, under Allian Pratt, managing director, Global Alliances and Board Outreach, and Karen Russo, director, Board Operations and Outreach. 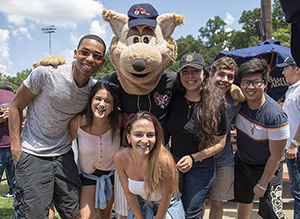 The Executive Interns took part in an ASME staff trip to a New Jersey Jackals baseball game.
Each week, the interns met with a different ASME team ― ranging from members of ASME’s Membership, Programs and Philanthropy, and Standards & Certification departments to representatives from the Society’s Biomedical Division and the ASME INSPIRE program. After learning about each group’s staff and receiving an overview of the projects they were currently working on, the interns were asked to propose a solution to a particular problem or issue the group was facing.

At the end of each week, the interns pitched their ideas to the group during a final presentation that was followed by a question-and-answer session. “Every Friday we present a pitch deck of all our solutions — a new business model or an analysis of the target market — and demonstrate our research for the week and offer our suggestions from an engineer’s and student’s perspective,” explained Migliaccio, who is chair of her ASME student section at NYU.

These weekly presentations, which were recorded to enable the interns to review them, turned out to be a valuable feature of the summer internship, the students said. Ensslin, for one, welcomed the opportunity to refine his public-speaking skills. “As a sophomore, I haven’t really had any presentation experience outside of classrooms,” he said. “So it was nice to get that entirely different perspective and have a very formal pitch each week.”

In addition to developing and presenting their weekly pitches, which included new concepts for membership benefits and the expansion of an Engineering for Change (E4C) competition pilot program into the United States, the interns also worked on side projects such as preparing business proposals for a proposed podcast for engineering professionals and a phone app for centralizing ASME’s online resources.

The internship program also offered the students a first-hand opportunity to observe the inner workings of ASME.

“One big thing I got out of the program was being able to see how an organization operates and its operational structure, because that’s something that I didn’t know anything about before,” said Maynor, who is now a senior at the University of Hartford. “You get to see how things run down through a chain of command, how decisions get made, what the different processes are that you have to go through in order to make those decisions, who you need to speak to — things like that. These are helpful to know because they’re what I’ll have to take into consideration when I’m starting a new project or a new committee when working with ASME or another organization.”

Ocampo, who is vice chair of NYU’s student section, was particularly enthusiastic about her summer-long experience. “If I had the option of doing this internship all over again, I would redo it,” she said. “It has been great.”

Valentina Alayon, who supervised the internship program, was also pleased with the inaugural class of students. “They’ve all been a really impressive group and they’ve come very far,” said Alayon, coordinator, Student and Early Career Engagement and Experience. “I’m really proud of the work that they’ve done and how they’re represented the first batch of Executive Interns.”