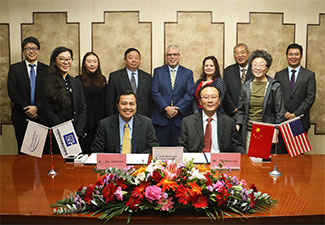 China Association of Special Equipment Inspection (CASEI) was recently approved by the American Society of Mechanical Engineers Personal Certification LLC (ASME PC) as the second Designated Testing Organization — and first located outside the United States — for the new ANDE-1 Standard for Certifying Non-Destructive Examiners and Quality Control. The agreement was signed at a ceremony on Oct. 18 in Beijing by Shuqing Lin, CASEI president; Jon Labrador, ASME PC LLC president; and Paul Lang, ASME PC LLC quality manager, who worked through details over the past year to make the partnership possible.

As a Designated Testing Organization (DTO), CASEI will be able to administer the practical demonstration portion of the ANDE-1 Personnel Certification process. Organizations must enter into an agreement with ASME PC, implement an ASME PC compliant quality program, and be subject to annual ASME PC audits for compliance in order to be selected as a DTO. Last November, Chattanooga State Community College in Tennessee was named the first DTO for the ANDE-1 standard by ASME PC.

Non-destructive examination (NDE) is the collection of methods to inspect material and determine whether surface or substance flaws are present that may cause material failure. Because NDE does not permanently damage the item being examined, it is a reliable and efficient inspection technique with applications in product evaluation, troubleshooting, research and repair. 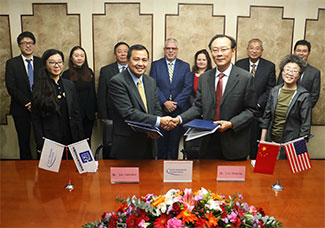 “ASME Personnel Certification is pleased to collaborate with CASEI on the ANDE-1 Standard for Certifying Nondestructive Examiners and Quality Control and we are proud to name CASEI as ASME’s second testing organization for this important certification program,” said ASME Executive Director Thomas Costabile. “CASEI and ASME have a long history in bringing and promoting ASME Standards and Certification to China. Now we begin again in bringing ASME Personnel Certification to China. This is a strong partnership that shares a commitment to engineering excellence, professional development and engineering workforce quality.”

“For 36 years, CASEI has provided high-quality inspection and examination for NDE to its workforce that has been driving progress and innovation in the manufacturing area,” added Shuqing Lin, president of CASEI. “This new exciting partnership with ASME PC is yet another example of how CASEI is committed to meeting the challenges of the Chinese industry.”

ASME’s Beijing Representative Office was an instrumental part of this collaboration with CASEI and the approval of the organization as a Designated Testing Organization. Through this office, ASME PC was able to facilitate teleconferences, emails and presentations with CASEI during the last two years as CASEI prepared for its onsite survey to be named an ANDE DTO.

ASME has had an established presence in China since China opened its doors to the rest of the world more than 40 years ago. In order to further accommodate the needs of ASME’s partners, clients and customers in China, the Society set up a representative office in Beijing in 2008 with the primary objective of facilitating and supporting ASME’s core businesses in China, including standards development, certification, technical exchange, publishing, and education and training. “Thanks to the effective cooperation of ASME partners in China, ASME has achieved more sustaining and remarkable progress in China since then,” said Zhang (John) Qiang, executive director, ASME Asia Pacific.

An Article to End All Articles