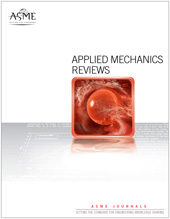 Applied Mechanics Reviews recently posted the latest in its series of podcasts, featuring engineering design authority Prof. Wei Chen of Northwestern University, on The ASME Digital Collection website. The interview with Prof. Chen, who is a professor of mechanical engineering and the Wilson-Cook Professor in Engineering Design at Northwestern, is one of more than 20 podcasts that are currently accessible on the AMR podcast page.

During the course of the one-hour podcast, Prof. Chen looks back on her distinguished record of professional service, including her current role as editor of the ASME Journal of Mechanical Design, and offers her observations regarding the power of interdisciplinary collaboration in promoting advances in predictive science, the integration of design in undergraduate engineering curricula, and how consumer choice may be influenced by purposeful design.

Prof. Chen, an ASME Fellow who served as chair of ASME Design Engineering Division in 2013-2014, has been the recipient of a number of honors during her career, including the Design Automation Award from the ASME Design Engineering Division, the ASME Pi Tau Sigma Gold Medal, the Ralph R. Teetor Education Award from the Society of Automotive Engineering, and the National Science Foundation Faculty Early Career Award.

ASME Fellow Harry Dankowicz, the editor of Applied Mechanics Reviews since 2012, conducted the interview with Prof. Chen for the podcast. Dankowicz, who is professor of mechanical science and engineering at the University of Illinois at Urbana-Champaign, also served as chair of the ASME Technical Committee on Multibody Systems and Nonlinear Dynamics.

Visit the Applied Mechanics Reviews podcast page now to hear the interview with Prof. Chen or listen to one of the other AMR podcasts from the series.