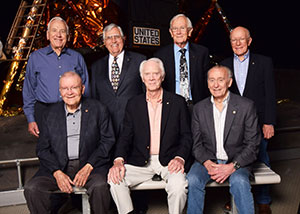 The “Apollo at 50” honorees: (Front row, left to right) Fred Haise, Rusty Schweikart and Walt Cunningham. (Back, left to right) Milt Windler, Harrison “Jack” Schmitt, Charlie Duke and Gerry Griffin. (Photos by Rod Leonhard, Cradle of Aviation Museum)
In June, ASME and Long Island’s Cradle of Aviation Museum kicked off a two-month-long celebration commemorating the 50th anniversary of human’s first step on the moon. The celebration continues tomorrow, July 20 — the actual date when, 50 years ago, Apollo 11 landed on the moon and astronauts Neil Armstrong and Buzz Aldrin set foot on it.

Sponsored primarily by ASME and Northrop Grumman, last month’s event at the Cradle of Aviation Museum was highlighted by a panel discussion with astronauts and flight directors from several of the Apollo moon missions. It also included a celebratory dinner attended by ASME volunteers and staff leaders, including ASME President Richard Laudenat, Past President and former Grumman executive Harry Armen, and ASME Executive Director/CEO Tom Costabile. 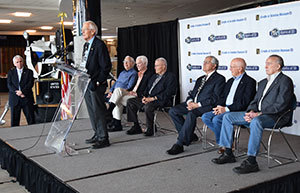 Charlie Duke (at podium), an astronaut on Apollo 16 and the 10th person to walk on the moon, addresses the audience during a press conference at the “Apollo at 50” anniversary gala last month at the Cradle of Aviation Museum.
Overall, about 800 people attended the event in Garden City, N.Y., which started early in the day with a screening of the recent IMAX documentary, Apollo 11, followed by a press conference with Apollo astronauts, and a reunion for Grumman employees who worked on the lunar module (LM). Grumman was based on Long Island in the 1960s and was the company that developed the lunar module.

The event’s honorees included astronauts Walt Cunningham of Apollo 7; Rusty Schweickart of Apollo 9; Fred Haise from the Apollo 13 mission; Charlie Duke of Apollo 16; and Harrison “Jack” Schmitt of Apollo 17. Also honored were Gerry Griffin, who served as a flight director during the Apollo Program and as director of Johnson Space Center, and Milt Winder, who was one of the four flight directors of the Apollo 13 Missions Operations Team and a recipient of the Presidential Medal of Freedom. 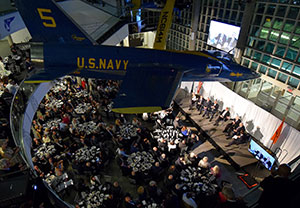 An aerial view of the “Apollo at 50” panel discussion featuring astronauts and flight directors from several of the Apollo moon missions.
The panelists covered a variety of topics including personal experiences on their respective missions, the impact of the moon landing, the Apollo 13 explosion and ultimate safe return of its crew, future space missions to the moon and Mars, and the importance of encouraging young people to become interested in space exploration. “Getting young people involved [in the space program] is really key,” Schweickart said. “As the cost of getting into space drops, the creativity will dramatically increase.”

ASME President Laudenat said that the NASA moon missions “marked a monumental achievement for all humankind. NASA’s sheer determination to meet the challenge set forth by President Kennedy to go to the moon is a testament to what can be accomplished when a team of engineers, technicians, scientists, and so many others, work together to fulfill a common mission.” 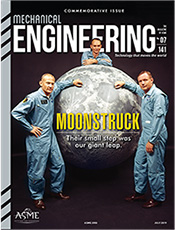 This month’s special commemorative issue of Mechanical Engineering magazine focuses on space exploration.
Mike Lisa, a 36-year Grumman employee who worked on the lunar module program said of the Cradle of Aviation, “This place to me is like Disneyland Northeast,” he said. “It’s great to walk through this place, see the LM, and see the things that I did on it. It’s extremely rewarding. And to see and hear these astronauts today ― it’s just a privilege. It’s fantastic.”

The Apollo Lunar Module, which is housed at the Cradle of Aviation Museum, is one of several Apollo-related artifacts that have been designated as Historic Mechanical Engineering Landmarks by the ASME History and Heritage Committee over the years. These also include the Crawler Transporters, the Saturn V Rockets, the Apollo Space Command Module and the Apollo Space Suit.