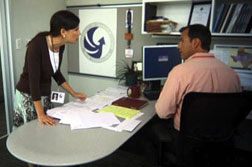 Laura with her Boss at the state department of transportation 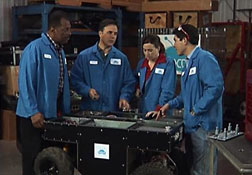 Julie with her team working on the smart highway design project

Lauraattendingameeting at the state department of transportation

The National Institute of Engineering Ethics (NIEE) has released a new film, Henry’s Daughters, which addresses some of the difficult ethical decisions that may face practicing engineers.ASME helped support the film’s production, and DVD copies are available for loan to ASME Sections and Student Sections.

Henry’s Daughters focuses on the ethical problems facing two sisters, Laura and Julie, working on a smart highway design project. Laura, the older sister, is an experienced engineer supervising the project for the state department of transportation while Julie, the younger, is a recent graduate employed by one of the project contractors. As the project proceeds the sisters gradually become aware of questionable behavior by their co-workers and by their father, a retired engineer working as a lobbyist. By the time Laura decides to “blow the whistle,” both sisters’ ethics have, to some extent, been compromised.

The primary ethical focus of the film is on the problem of unfair competition, but it addresses many aspects of engineering ethics: conflicts of interest, intellectual properties, privacy, and gender issues.

The characters in Henry’s Daughters face realistic ethical problems without clear-cut solutions. The best of them find themselves trapped in compromising situations despite their principled intentions. The worst of them don’t think of themselves as corrupt – they just believe that they are conducting “business as usual.” The film’s ambiguities generated considerable controversy when it premiered at the 2010 Frontiers in Education conference in Washington, D.C.

The film is 32 minutes long and is subtitled in 13 languages. It is accompanied by a study guide that can be used to guide group discussion of the film’s ethical issues.

Henry’s Daughters is the third film on engineering ethics produced by the NIEE. In 1989 Gilbane Gold addressed issues related to the environmental impact of engineering decisions, while 2003’s Incident at Morales focused on public and worker safety. NIEE has also published an ethics reference book: Engineering Ethics, Concepts, Viewpoints, Cases, and Codes (2008).

The NIEE was founded in 1988 by the National Society of Professional Engineers. In 2001, NIEE merged with the Murdough Center for Engineering Professionalism at Texas Tech University. The organization exists to encourage the study, application, and promotion of ethics in engineering practice and education.

The NIEE’s Executive Board consists of representatives from the ASME and other engineering societies, as well as at-large members representing a wide segment of the engineering profession.

To purchase this training DVD from NIEE it would cost $500. However, ASME is loaning copies to senior and student sections for free viewing and training.Contact your section leader today toensure your section takes advantage of this special opportunity.

AttentionASME Senior Sections and Student Sections: To borrow a copy of Henry’s Daughters for presentation at a section meeting contact ASME staff member David Soukup at soukupd@asme.org.The study guide may be downloaded from the NIEE.