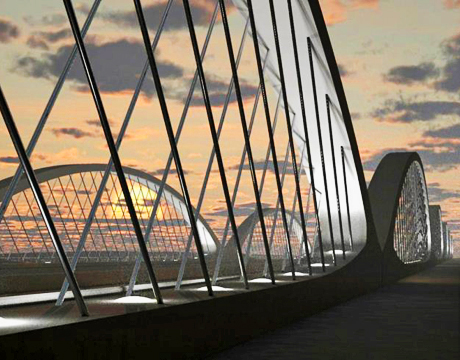 As the bridge industry moves toward accelerated construction and precast components, the city of Fort Worth, TX, is ahead of the game with the world's first precast-concrete network-arch bridge at a city gateway across the Trinity River.

The bridge, which was designed by the Texas Department of Transportation and is being built by Tempe, AZ-based Sundt Construction, is scheduled to be completed this fall.

The innovative design and construction came about when the City of Fort Worth approached the Texas Department of Transportation for help in replacing a 100-year-old bridge across a popular thoroughfare connecting downtown to a cultural district. Fort Worth wanted a landmark that would be aesthetically pleasing and would make an impressive statement to motorists and pedestrians in the area. But the city also wanted to make sure during construction there was minimal disruption of traffic across the bridge and throughout surrounding streets where commercial and retail development arejust getting up and running.

TxDot engineers came up with the idea of marrying two types of bridge construction to meet Fort Worth's requirements: a network-arch bridge and a precast-concrete bridge. A network-arch bridge is architecturally interesting but typically made of more costly steel and because it is built in place, it causes more disruption of traffic; a precast-concrete bridge, although not as aesthetically pleasing, is more economical, quicker to build, and requires much less lane closure time because the major components are built off-site.

"This is a very innovative idea," says Chris Cedar, Sundt civil group Texas area manager and the bridge project manager. Considering what Forth Worth was looking for, "This seemed to be a good solution."

The bridge is a series of 12 post-tensioned concrete arches, six on each side, which are the main structural elements. Each arch is 163 feet long and over 23 feet tall. While the new bridge will remain with four traffic lanes, it will be much wider to incorporate lanes outside the arches for pedestrians and cyclists.

The plan called for building the precast arches off-site, with expected total bridge closure time of no more than 150 days, according to TxDot, much less than the typical 12 months or more using traditional bridge construction methods.

When Sundt took on the project, the design was complete, but there were still some issues that had to be resolved, Cedar says. For example, engineers had not decidedhow to build the arches and transport over a million pounds gross vehicle weight over the existing original bridge built in 1913. "We had to do a lot of analysis of the existing bridge to make sure we could transport the [arches]," which were to be placed on columns alongside the existing bridge, he says.

Sundt decided to cast the arches on their sides for efficiency and planned for unconventional post-tensioning, or reinforcement of the concrete with cables, by doing so in three stages.

"There were a lot of challenges associated with the form you'd have to provide trying to cast them in a vertical position 23 feet tall," says Cedar.

"When we started, casting the first arch took about six weeks." Cedar says. "But by the time we cast the last ones, it was one about every three weeks."

Work at the site, installing the drill shafts and columns, took place in spring, and the 12 arches were moved to the site on self-propelled mobile transports over a period of several weeks in May and June and put into place. The bridge closed in June for the final phase, which includes demolishing the old bridge and hanging beams across the arches that will hold the new roadway surface, which is being built in a conventional way.

For Further Discussion
We have 150 days to have the bridge back open, and a $900,000 incentive to get it open 30 days earlier.Chris Cedar, Sundt Construction