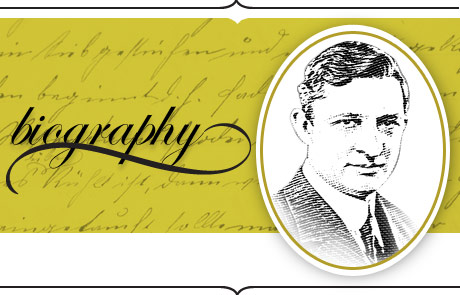 Born in 1876 and raised as an only child on his parent's farm in Angola, NY, Willis Haviland Carrier was known as a quiet, gifted child who solved problems easily.

"My mother told me to bring up a pan of apples from the cellar," he stated in a memoir. "She had me cut them into halves, quarters and eighths and add and subtract the parts. Fractions took on a new meaning and I felt as if no problems would be too hard for me—I'd simply break them down to something simple and they would be easy to solve."

His parents nourished his intellectual curiosity. Carrier was awarded a four-year scholarship to Cornell University. In 1901, after graduating with a degree in mechanical engineering, he hired on with Buffalo Forge Company, a firm that designed and manufactured steam engines and pumps. His first assignment was designing a heating system to dry lumber and coffee. Carrier was soon running his own tests and experiments to improve heater design; his efforts were so successful the company promoted him to director of experimental engineering.

In 1902, a printing company in New York City approached Buffalo Forge Company with a challenging problem: changes in heat and humidity in the plant affected the dimensions of the printing paper, resulting in misalignment of the colored inks. Carrier solved the problem by building the first air-conditioning system. The new system created a stable atmospheric environment within the shop that resulted in the accurate ink alignment necessary for four-color printing.

After advanced research and field testing, Carrier patented his Apparatus for Treating Air in 1906. His air-treatment device was driven by a low-pressure centrifugal system that drew air through a filter and passed it over coils filled with coolant; the cooled and dehumidified air was then vented into the living or work space. The hot air generated by the motor was directed outside. Carrier also discovered that "constant dew-point depression provided practically constant relative humidity," a discovery essential to his designing an automatic control system.

In 1911, at the annual meeting of the American Society of Mechanical Engineers, Carrier presented what many scientists consider to be the most significant document ever presented on air conditioning: this in-depth explanation of his Rational Psychrometric Formulae included a detailed look at the physical relationships between relative humidity, absolute humidity, and dew-point temperature. Carrier indicated his "flash of genius" came while waiting for a train; intrigued by the fog surrounding him, he had the relationship between temperature, humidity, and dew point worked out by the time his train arrived.

With the onset of World War I, Buffalo Forge Company decided to become strictly a manufacturer—no more research and development. Carrier and six other engineers pooled their life savings (about $35,000) to form the Carrier Engineering Corporation in 1915 (it later became the Carrier Corporation in 1930).

Rapid success followed as the company continued to design and manufacture new refrigeration units of steadily increasing capacity to cool larger spaces. These were followed by home air-conditioning units, which were directly responsible for the population migration to the "Sun Belt" in the southeastern U.S. in the 1920s. Carrier continued to refine his theories and received several more patents before his death in 1950 at age 73. Carrier Corporation continues to be the world's largest manufacturer of climate control equipment today.

Alfred University awarded Carrier an honorary doctorate of letters in 1942 in recognition of his contributions to science and industry. He was also admitted to the National Inventors Hall of Fame and the Buffalo Science Museum Hall of Fame. Carrier's invention transformed quality of life around the world by increasing industrial productivity during the hot summer months, protecting sensitive environments (archives, computer data centers) from damaging humidity, and making summer more bearable for everyone indoors.

His air-treatment device was driven by a low-pressure centrifugal system that drew air through a filter and passed it over coils filled with coolant.