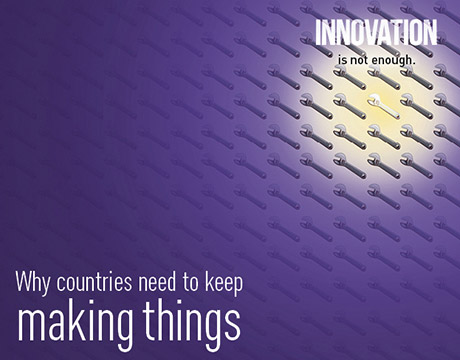 Services make up nearly two-thirds of the U.S. economy. Manufacturing accounts for only 12 percent. For many decades, economists looking at this disparity argued that manufacturing played a minor role in the modern economy, and that $1 billion generated by warehousing, transportation, and retailing produced the same economic benefits as $1 billion in production.

They were wrong. Over the past decade, more and more economists have confirmed that manufacturing is indeed different from services. It is essential to innovation, and tightly linked to our nation's economic health and national security.

First, while manufacturing might be a small component of the U.S. economy, its output still came to $1.9 trillion in 2012, and by itself would have made the world's tenth largest economy. The U.S. manufacturing sector was larger than the total economies of India, Canada, Mexico, or South Korea.