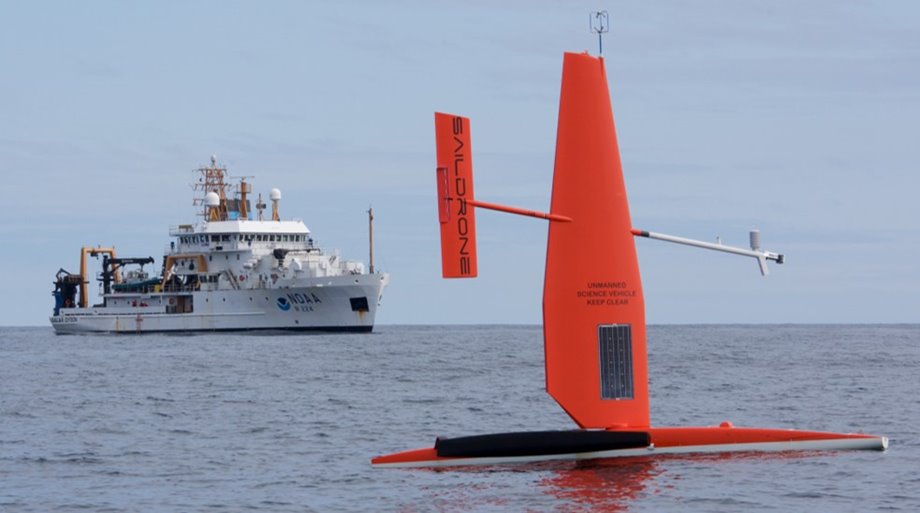 Autonomous surface vehicles, such as the Saildrone, are being used to help scientists collect data from oceans all across the world.

For many scientists, the next frontier is no longer space exploration, but rather to acquire a deeper understanding of what is occurring in the world’s oceans. The challenges are just as daunting, and the data critical in understanding the past, present and future. But, like space discovery, many of the tried and true systems to investigate what is happening beneath the surface of the world’s oceans are outdated, expensive and not keeping pace with the technological innovations that are now widely available.

“The ocean science community has a real problem,’’ said Noah Lawrence-Slavas, an engineer with the National Oceanic and Atmospheric Administration. “The oceans are vast, difficult to observe and in many places, particularly high latitude regions, are rapidly changing.”

More and more, scientists are using autonomous surface vehicles (ASV) and subsurface vehicles (AUV), to retrieve data about animal tracking, carbon, oil detection and even illegal traffic around sanctuaries. Two autonomous surface vehicles, called Saildrones, incorporated data cables and energy chains made by igus, the Germany-based manufacturer of motion plastics, in a recent ocean study. The igus components withstand the harmful effects of saltwater and have an extended life cycle compared to components made with steel. Data collected from the Saildrones was compared to information collected from a noise-reduced research vessel.

“We have been exploring the use of ASV and AUV to lighten our ship time requirements and increase the spatial coverage of our buoy measurements,’’ Lawrence-Slavas said. “From research, it is clear that autonomous vehicles play a very important role in the future of ocean observing.”


Lawrence-Slavas said traditional ocean observation centered on heading out to sea and making detailed and varied observations, and deploying buoys with sensors when ships are not in the area. Chartering a ship, however, can cost more than $35,000 per day and scientists only collect samples from along the route of the vessel.

“Ships are very expensive to build, crew and operate,’’ Lawrence-Slavas said. “The NOAA fleet is shrinking while demand is increasing. In 2017, the NOAA fleet was meeting less than 50 percent of the demand for days at sea. The discrepancy has become greater as we continue to lose capability due to attrition from aging ships.”

Buoys are excellent sources of time-series measures to look at long-term trends. “But they do a poor job of resolving spatial changes in the ocean, particularly in highly variable coastal regions where you can see significant changes in the ocean over short distances,’’ Lawrence-Slavas said. Buoys also require ships, which increases costs and contributes to limited ship resources.

Satellite observations are expanding, but lack the ability to see below the molecule thick skin of the ocean, do not possess the resolution needed to resolve many important fine scale processes, and lack the accuracy needed for many measurements.

ASVs and AUVs reduce ship time requirements and increase the spatial coverage of buoy measurements. “They are not a 1:1 replacement for ships or buoys, but are more of an augmentation to these traditional technologies in order to expand our understanding of the ocean and to make more cost-efficient measurements,’’ Lawrence-Slavas said.


One recent experiment looked at the complex task of evaluating data collection by autonomous vehicles. In the project, two unmanned surface vehicles from Saildrone were equipped with echosounders and deployed in the Bering Sea. The goal was to make acoustic observations of the walleye pollock for 103 days and record their reactions to research vessels.

Saildrone, a company based in California, designs, manufactures, and operates a global fleet of wind and solar-powered ocean drones that monitor the state of the planet in real time. The drones are powered with a propulsion system and include a tall, hard wing, a longitudinal spar and a vertical tail. A trim-tab on the tail adjusts the wing angle to the wind, similar to the way an elevator trim tab controls the pitch of an aircraft.

The wing technology enables a mission duration up to 12 months. Each vehicle consists of seven-meter hull, a five-meter tall wing, and a keel with a 2.5 meter draft. Each unit weighs about 750 kilograms and can be launched and recovered from a dock They have an average speed of 2-3 knots and can reach top speeds above eight knots. They sail an average of 100 kilometers per day.

“The Saildrone is a very capable autonomous surface vehicle,’’ Lawrence-Slavas said. “It can carry a large science payload, has solar panels to provide higher power to instruments than most buoys, and can cover lots of ground.”


For the experiment in the Bering Sea, the NOAA equipped the Saildrone with an echosounder, a type of sonar used to determine the depth of water by transmitting sound waves into the water. The goal was to look deep into the water underneath the vehicles and measure everything in the water that reflects the sound waves.  “We wanted to turn the Saildrone into a tool for ocean research by integrating, testing and ground trothing sensors for ocean research on the vehicle,’’ Lawrence-Slavas said.

Starting in 2014, the NOAA began working with simple sensors and worked its way to more complex sensors. Through integration, working closely with Saildrone and the echosounder manufacturer, Simrad, the NOAA team was able to customize an instrument for an ASV that recorded the movements of walleye pollock.

“We compared the Saildrones to NOAA fisheries ships to make sure we were collecting high quality data,’’ Lawrence-Slavas said. “We are now using echosounder-equipped Saildrones to conduct the targeted science missions to determine the applicability of the vehicle to augment various NOAA missions.”


Two components from igus proved critical to the success of the NOAA experiment. The Saildrones in the experiment included chainflex data cables and an energy chain that acts as  a bend limiter to increase cable flexure life. 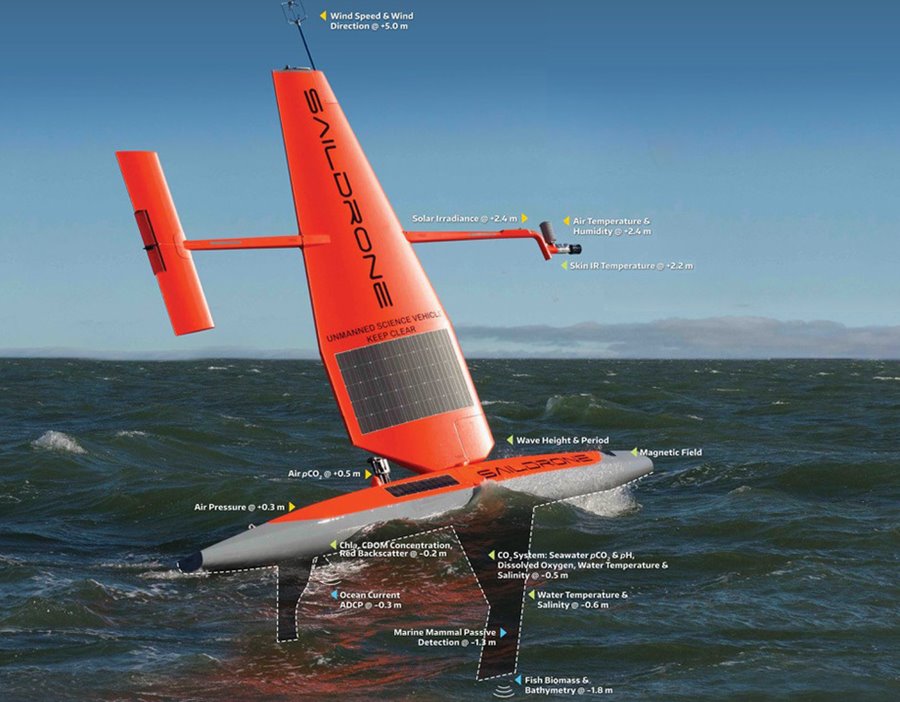 In a recent experiment, chainflex data cables from igus were included on autonomous surface vehicles to retrieve information, which was then compared against a noise-reduced research vessel.
The data cables are used in heavy duty applications in indoor and outdoor environments. When supported, they have gliding travel distances up to 40 meters, and are typically used in high-bay warehouses, machining units and machine tools, semiconductor insertion, outdoor cranes and low temperature applications. Essential to the NOAA project is a thermoplastic elastomer cable jacket that withstands the effects of saltwater “The power and data cable attaching to echosounder electronics needed to not degrade over the more than five million bend cycles the cable would see in a typical one-year long deployment,” Lawrence-Slavas said.

Waves cause a lot of movement of the Saildrone, which can impact the data collection essential to the experiment. The energy chains have a high tensile strength and are completely enclosed. They are frequently used in applications that move within two or three axes.

“The big challenge for fish finder installation was how to remove the heel bias on the echosounder data,’’ Lawrence-Slavas said. “The Saildrone acts like a sailboat, so when the wind blows, it heels over. To get high quality echosounder data, the echosounders transducer (which generates and then receives the acoustic pulses) must be on average pointing straight down. We needed to remove the Saildrone’s heel from the echosounder’s transducer so we built a hinged mount. The two-foot long energy chains and chainflex cables allowed us to reliably transmit power and receive data through the moving mount.  We have used these components on Saildrones that have been deployed on the West Coast of the United States, the Bering Sea, the Arctic Ocean and waters off of Australia. They were also on vehicles that for the first time ever circumnavigated the Antarctic Ocean.”


The results of the experiment provided some interesting and unexpected results. While they compared well to a state-of-the-art research vessel, there were consistent differences.

Walleye pollock – also known as Alaska pollock – is a key species in the Alaska groundfish complex. It is distributed in the North  Pacific Ocean with the largest concentrations in the eastern Bering Sea.  Nearly three million tons of walleye pollock are caught each year in the North Pacific, and is considered the world’s second most important fish species in terms of total catch.

“This study demonstrates that it  is now practical to make routine long-term measurements of acoustic backscatter over a wide area with an ASV equipped with an echosounder equivalent to those used in fisheries surveys,’’ the NOAA team wrote in the ICES Journal of Marine Science.

While challenging, the study proved autonomous vehicles can be an integral part in ocean discovery. Lawrence-Slavas said ASVs and AUVs are opening an entirely new world for scientists. There is a ton of information just waiting to be discovered through ocean monitoring, and autonomous vehicles are changing the direction as to how that information is gathered.

“The reality of self-driving cars are on the horizon, and we have autonomous surface vehicles, like the Saildrone, that are doing amazing things,’’ he said. “These vehicles are crossing oceans by themselves, operating in the worst ocean environments. They have the potential to revolutionize both how and what we are able to learn about the ocean. It would be very hard not get excited about the possibilities.”