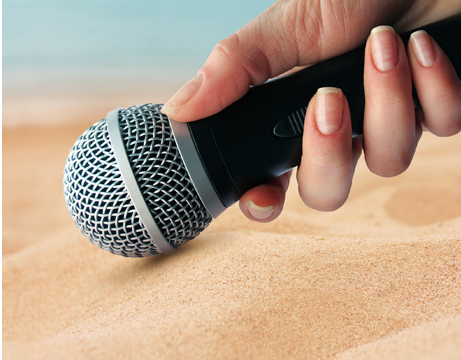 What is the sound of sand? Is it a gentle shift when lapped by waves? The wet splat of a castle foundation in the making? Or is it a controlled 200 megahertz, operating as an oscillator in a laptop? Nicholas Fang, professor in the Department of Mechanical Engineering at MIT, and his colleagues, have shown that, when tiny enough, and packed tightly enough, the acoustic properties of sand will soon change the high-tech soundscape.

Fang was in the vicinity of Manchester by the Sea, outside of Boston, when he received a missive from a student urging him to visit the nearby shore. “Because you are doing acoustics, you must go to the singing beach, where the sand makes sounds,” it said. Fang and his group obeyed, and played. They slid their feet on the sand, jumped on the sand, rubbed the sand. And indeed, it sang (or squeaked, or barked). Some students recorded the granular output. Nicholas Boechler (now a professor of mechanical engineering at the University of Washington) said, “‘Hey, maybe this is a problem that happens across different sand scales,’” explains Fang.

Post-holiday, the group threw themselves into solving that problem. “We started to make a serious investigation into how to slow sound waves, how to trap a sound wave.” They found that silicon grains of sand, a micron in diameter, would sing, to the tune of 200 megahertz. They covered a substrate with a single layer of tiny silicon spheres. When they excited the substrate with lasers, the resultant surface acoustic waves were slowed and controlled by the sand, by a factor of four to six. In essence, the coating proved itself as a potential oscillator. And with its ability to redirect sound, it could someday work to help mitigate blasts.

The trick resides not so much between the grains of sand as between the single layer of sand and the substrate. At the scale Fang and his lab are working at, the glue that binds stratum and substrate has a much larger effect than it does at larger scales. “We need something that is adhesive but also elastic,” says Fang. “That’s not very easy.”

Fang managed to tie the two with Van der Waals forces. “It’s strong enough to provide a resonance frequency when the sound is traveling between the sphere and the substrate.” That frequency is two orders of magnitude higher than that found in oscillators in current electronics. The frequency of the standing waves of those oscillators is determined by their size. To make the components any smaller, the sound has to be slowed. The sand’s ability to rein in sound waves means that the oscillators of the near future are likely to shrink to ten times their current size.

Long before Fang’s frolic on the tuneful beach, researchers had theorized that such a sound-slowing layer of tiny particles was possible, even at the atomic level. “In the 90s it was just a mathematical curiosity,” says Fang. “They knew this could work, but they only had the theory. They couldn’t prove it, couldn’t do an experiment like we do now.”

The shift from theoretical curio to applicable invention is owed in large part to recent techniques that measure tiny vibrations with light. “This was not available back in the 90s,” says Fang. “Now we can use X-rays to do that. We hope to see vibration at the nanoscale in the future.”

The only hurdles to putting the coating on chips ASAP are practical ones. When printing large swaths of such a coating, it’s hard to keep things uniform. The perfect mosaic breaks down and finger-like patterns tend to emerge. But Fang and his colleagues are currently developing better ways to stitch together large, perfect layers of sand.

Once that’s been worked out, our thirst for ever-shrinking electronics may be momentarily slaked by the sandy surface.

For Further Discussion
In the 90s it was just a mathematical curiosity. They couldn’t do an experiment like we do now.Prof. Nicolas Fang, MIT