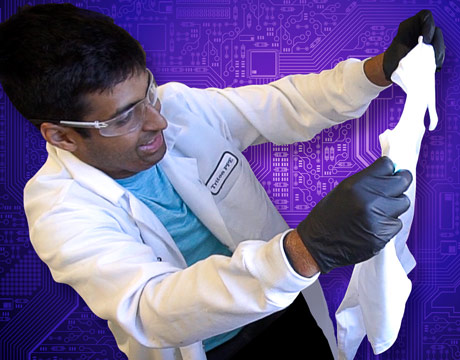 Rajan Kumar, a Ph.D. student at the UC San Diego School of Engineering, assesses just how far the material on which the battery is printed will stretch. Image: UC San Diego

Wearing Your Battery on Your Sleeve

A recently developed printed, rechargeable battery certainly isn’t the same type that pink bunny from television relies on. This wearable battery stretches and flexes like rubber.

Nanoengineers at the University of California, San Diego, developed the battery, which, they claim, is the first of its kind due to its stretchiness. The zinc batteries have a myriad of uses, powering everything from wearable sensors to solar cells and wearable electronics, says Joseph Wang, chair of the nanoengineering department at the university.

“This is a significant step toward self-powered stretchable electronics,” he says.

Materials that can be worn and that incorporate batteries can monitor medical conditions, power electronics, track sports performance, or be used in ways not yet thought of.

In the medical field, patients with chronic conditions such as diabetes or chronic obstructive pulmonary disease could don a wearable monitoring device to alert them to a change in their health that needs medical attention, for example. Or, for the hiking enthusiast, the electronics could power backpacks in the outdoors and assist with outdoor navigation by being linked to a GPS system.

But questions remain. How, for example, can the batteries that power wearables be stretched, flexed, washed, and worn and still work without breaking down?

The answer, says Wang, is the hyper-elastic polymer material made from isoprene—one of the main ingredients in rubber—and polystyrene, a resin-like component. The substance, known as SIS, allows the rechargeable batteries his team developed to stretch to twice their size, in any direction, without being damaged.

The researchers added bismuth oxide to the batteries’ zinc electrodes to make them rechargeable, he adds. The ink used to print the batteries is made of zinc silver oxide mixed with SIS.

His team’s prototype battery only has about one-fifth the capacity of a rechargeable hearing aid battery, but it’s only one-tenth as thick, is cheaper and made of commercially available materials. Two of the rechargeable batteries could power a three-volt light-emitting diode (LED), Wang says.

The researchers used standard screen-printing techniques to make the batteries, a method, they say, that drives down costs. Wang says typical materials for one battery cost about 50 cents while a comparable, commercially available rechargeable battery costs around $5.

And the types of batteries that the technique can be used to print need not stop at zinc-based batteries, he adds.

“We expect this technology to pave the way to enhance other forms of energy storage and printable, stretchable electronics: for lithium-ion batteries, as well as supercapacitors and photovoltaic cells,” Wang says

Now, the researchers are working to improve the batteries’ performance. They want to expand the use of the technology to applications such as solar and fuel cells and to power many types of electronic devices, Wang says.

For Further Discussion
We expect this technology to pave the way to enhance other forms of energy storage and printable, stretchable electronics.Prof. Joseph Wang, University of California, San Diego