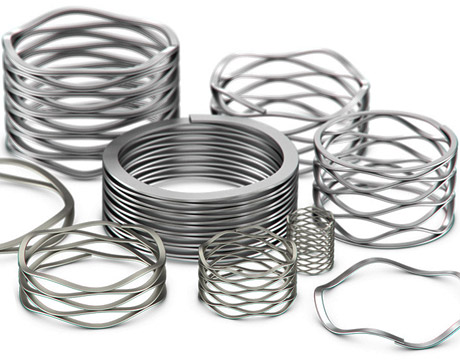 Springs have long been used in mechanical engineering but an underrated version of this ubiquitous device is the wave spring, which affects its share of industries.

“The springs most people are familiar with are coil springs, round wire coil springs in pens and shocks in cars,” explains Ben Moskalik, a senior R&D engineer for Smalley, a wave spring manufacturing company based in Lake Zurich, IL. “Wave springs are different because they’re not torsional but pure bending. They have both a bending force and a bending stress formula. What comes out of that, because they’re different formulas, is generating the same amount of load and the same amount of deflection. But it’s in lower height than a coil spring. You use them to reduce the size of the applications you might be designing.”

He notes that wave springs were actually stamped a half century ago or longer, like a flat washer but wavy.

“It would be used for preloading,” Moskalik says, “It was there if you needed a little bit of force but not a lot of deflection. Then coil wave springs started and they weren’t just for single turn but could do multiple turns. In fact, multiple turns were what allowed us to do the crest wave spring and it looks kind of like a honeycomb. That happened maybe 40 years ago. Ever since, the goal has been to perfect that. For example, in the last 10 years, we started making round wire wave springs because we could generate a lot of load in a small radial space.”

A technology that wave springs are commonly used for is the preloading of bearings. “For example, people who have bearings in electric motors or anywhere you might be going at a high speed of rotation,” he says. “Bearings can vibrate, make a lot of noise and create premature wear. So when you put a wave spring in with a bearing, it actually takes out the internal slack of it, extends the life of it and will make it quieter. You can take that thought forward with any application that has some sort of slack in it. It could be thermal expansion, for example.”

You also see the crest-to-crest version frequently in the oil industry, he says. “This is where they need a great deal of load for something but need it to travel like a normal spring would,” Moskalik says. “One example would be if they need a Murray connector to hold the overall oil platform in place or it could be in a situation where they’re putting in seals for ball valves. They have to make sure the seal is applying a lot of pressure to the ball of a valve. They would have nested wave springs pushing a lot of load to keep it in place or it would leak.”

While in many ways, Moskalik says, wave springs have neared their potential, one area they’re still improving in would be when it comes to shrinking their size. “The smallest part we might have in diameter is a quarter inch and we’re going beyond that,” he says. “That will benefit industries like medical, where surgical instruments need to be coiled in a smaller diameter but still have smaller length in a coil spring. People don’t realize how often these springs are helping.”

For Further Discussion
Wave springs are different because they’re not torsional but pure bending. They have both a bending force and a bending stress formula.Ben Moskalik, Senior R&D engineer, Smalley