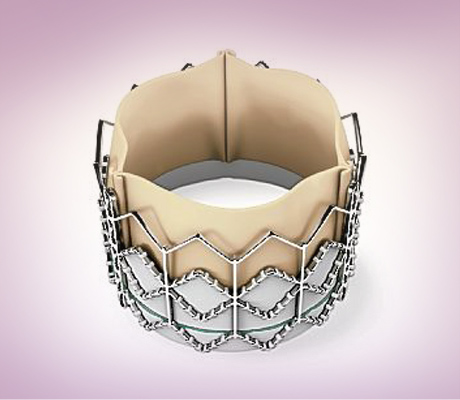 In the medical world, no clinical specialty borrows more heavily from the canons of engineering than cardiology. Engineered devices and tools designed to repair or replace defective hearts and blood vessels have dramatically reduced the deadly toll of the nation's leading killer during the past 50 years.

The hottest property in the cardiac device field today is the Sapien transcatheter aortic heart valve, from Edwards Life Sciences, Irvine, CA, the first such device to replace a defective aortic valve without the need for open-heart surgery.

The tiny valve, made of bovine tissue within a collapsible stainless-steel stent, is steered to the aorta along the femoral artery by a balloon catheter inserted through a small incision in the leg. Once guided into place in the aorta, the implant is expanded to full size, immediately replacing the function of the patient's damaged valve.

The Food and Drug Administration approved the Sapien in November 2011, but only to treat patients who are too old or too sick to be good candidates for open-heart surgery. Edwards views this as the first step toward broader approval of next-generation Sapien valves for the huge U.S. market of up to 100,000 potential patients.

When dealing with anything connected to the heart, an abundance of regulatory caution is always a good idea. But faced with at least two more years of clinical testing – and the knowledge that the Sapien has been available in Europe for four years – potential U.S. patients are understandably frustrated by the painstaking pace of the approval process.

Charles "Crazy Charlie" Dotter (1920 - 1985) would share their frustration. Dotter laid the groundwork for the Sapien in the late 1950s and 1960s by inventing, among other things, the cardiac catheter and the now ubiquitous technique of angioplasty. He also had his own ideas about the best way to demonstrate the safety of his inventions.

Dotter chaired the Radiology Department at the University of Oregon Medical School, now Oregon Health & Science University, in Portland. Back in 1961, Dotter was increasingly frustrated by mainstream concerns about the safety of his cardiac catheters. One morning, while presenting a seminar on this topic for his skeptical colleagues, he had a six-foot-tall cathode oscilloscope wheeled into the auditorium.

As he demonstrated the device, he revealed to the stunned audience that he had been speaking for the past 20 minutes with a catheter in his own heart. He plugged the end of his catheter line into the scope and showed colleagues what a normal heart reading looked like. To the discomfort of many in the audience, he proceeded to move the catheter among the various chambers of his heart, calmly comparing and contrasting the readings.

The Dotter legacy is rich with such tales of audacity in the face of the status quo.

Dotter's "Crazy" moniker was his friends' affectionate tribute to his wild gaze and famously unpredictable public persona. He was a publicity-loving daredevil who enjoyed rattling cages almost as much as he loved saving lives and limbs. A radiologist by training, he was a mechanical engineer by any other measure. His fast X-ray cameras paved the way for today's real-time cardiographic imaging systems. Along with his catheters for better angiograms, he experimented with ways to actually use them for treatment of blood vessel disorders. He used that technology to perform the world's first angioplasty in 1964, saving the left foot of an 82-year-old woman who refused amputation. That achievement went unsung for more than a decade, while the mainstream medical world caught up with him. By the 1970s, many one-time skeptics were making lots of money performing Dotter's techniques.

Dotter designed and developed his own catheters, and he designed his own fanciful coat of arms–a crossed pipe and wrench mounted above his desk. "If plumbers can do it to pipes, we can do it to blood vessels," he liked to say. Young entrepreneur William Cook discovered Dotter's engineering brilliance at an industry trade show, and built a medical device empire largely on the power of his novel catheters.

Dotter saved lives while chain smoking, hot-rodding, and scaling the nation's 67 tallest mountains. He proudly tweaked the medical establishment when he saw the opportunity to prove his theories. Conventional cardiologists often had to hold their noses when referring patients to him.

Visualize But Do Not Try to Fix

"Visualize but do not try to fix," wrote one wary surgeon on his order to Dotter for a routine femoral angiogram. Dotter set out to follow those instructions, but found instead an opportunity. The patient was revealed to have two problem areas where the artery had narrowed to unsafe levels. The most obvious one was superficial, but Dotter found a more severe spot farther down. Dotter's catheter left the superficial problem intact as promised, but treated the deeper, more serious problem by dilating the artery with his controversial "catheter therapy." A later photograph of Dotter and his patient celebrating at the 11,000-foot summit of Mount Hood is evidence of who won the ensuing debate.

Dotter went on to make other key contributions including early advocacy for the once-controversial technique of CPR and the invention of devices to administer "last chance" resuscitation therapy. But his biggest impact on health may be realized through today's spirit of partnership between traditional cardiac surgeons and Dotter's medical progeny, the interventional radiologists. Such partnership would have been inconceivable in 1961, but today it's routine. In fact, Edwards code-named the Sapien clinical studies "Partner I" and "Partner II" because of the intense cooperation between the two professions.

Although today's regulatory environment for medical devices may err on the side of caution, true engineering geniuses like Dotter will eventually get to the heart of the problem.

Dotter saved lives while chain smoking, hot-rodding, and scaling the nation's 67 tallest mountains. He proudly tweaked the medical establishment when he saw the opportunity to prove his theories.