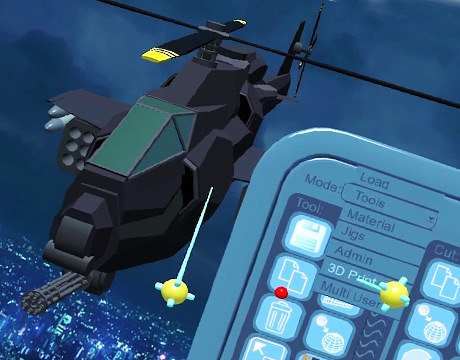 A new 3D modelling application with a 3D multi-touch interface that replaces the traditional mouse and keyboard. Image: Sixense

There’s something unnatural about the way people cobble together products and prototypes in the digital age. Building things destined for three dimensions in a two-dimensional medium can make the process needlessly complex and counterintuitive. But if you want an object to exist as a file first, there’s currently no other way.

That’s about to change. Thanks to the people behind MakeVR, designers, architects, sculptors, and makers of all kinds, will soon be able to get into their objects as never before. The coming onslaught of virtual reality technology isn’t just for gamers.

MakeVR is, in essence, a program built on a CAD engine that will run on any of the virtually reality platforms soon to hit the market. With it, workers in 3D will be able to submerge themselves in a space where they can work with any conceivable digital tool to build any conceivable element. Using the same kind of gestures we’ve all quickly learned on smart screens—swiping, zooming, scrolling—designers of any level of professionalism will cavort around their creations with ease. “With either hand you can grab any point in space and move it in any direction,” says Steve Hansted, MakeVR’s product manager. “You can walk your way through the environment, you can climb a rope with two hands, you can grab, rotate, and scale your environment up or down. Those simple navigation metaphors allow you to very rapidly do whatever you want.”

Since it’s essentially a CAD program, MakeVR comes with all the usual CAD tools, allowing users to work as precise and as detailed as they need to—but with much greater speed. “Traditional tools have very steep learning curves, and there are deep menu based items. It takes a long time to learn to use them and once you do you’re still relegated to work in the same standard 2D environment, using mouse and keyboard to rotate and navigate,” says Hansted. “It’s not intuitive. With MakeVR you are working at all times in 3D. The learning curve is so much easier, especially if you have no modeling experience.” Hansted estimates that, even for experienced modelers, a task like “grabbing a cylindrical object and sticking it in a circular hole” is nine times faster in MakeVR than it is with a keyboard and mouse.

It’s so much easier that complete newbies have been able to slide on a pair of VR goggles and start building within minutes. Children that visited one conference and tried MakeVR got to work as if they’d been handed a box of blocks. “It was kind of stunning,” says Hansted. “Young kids are raised on 2D multi-touch. I would just hand them the controllers and stand back—they would just start pushing buttons till something happened. Watching the kids in there, it was frightening, it was just that natural.”

The first big market likely to adopt MakeVR is3D printing. The printers are priced for, and targeted to, the everyman—who usually doesn’t have any skills in CAD. With MakeVR it may take longer for the average Joe to print an object than to build it. But game makers, whose 3D worlds stay digital, are also likely to take to the technology like virtual fish in virtual water.

More traditional prototypers are likely to jump in too. With MakeVR, multiple designers and can be working on the same project in the same virtual space. And models can be shared with clients from afar, with every detail, in and out, up for scrutiny. Alterations, of course, can be made on the fly.

With VR technology only just now springing on the scene, it’s hard to know just how big of an impact it will have on the world of design. Once engineers get their heads in VR goggles on a regular basis, the program is sure to evolve to meet their needs. “The way things are progressing right now, I can’t image what’s two years down the road,” says Hansted. “10 years down the road I’m sure we’ll all have chips in our head.”

For Further Discussion
With MakeVR you are working at all times in 3D. The learning curve is so much easier, especially if you have no modeling experience.Steve Hansted, product manager, MakeVR