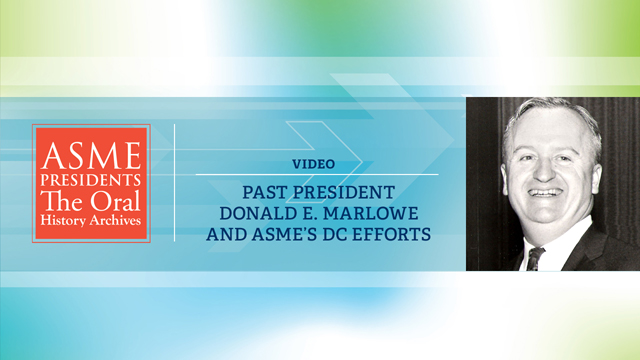 Donald E. Marlowe, the 88th President of ASME, served his term in 1969-70. Among the topics he addressed in his wide-ranging Oral History interview (recorded in 1993) was ASME's establishment of its office in Washington D.C. Marlowe had long been a believer in the importance of technical expertise to national policymaking, as well in the need for the Society to serve as a voice on behalf of the profession of engineering in Washington. Marlowe's presidency afforded him a chance to lead ASME toward the creation of a D.C. office whence such efforts could be pursued.

Marlowe's presidency took place at a time of major change for ASME. Preparations for an overarching "Goals Conference," to help chart a wholly new direction for the Society, were already underway as he entered office. The ASME Goals Conference—well-known to members then as "Arden House" after the meeting center where the two-day discussion took place—formulated an enlarged agenda for the Society, among whose top items was a much enhanced approach to and interaction with government. In order to make such efforts possible at the national level, Marlowe pushed for the establishment of an ASME office in Washington, D.C. The proposal was accepted by ASME's membership, and by 1972, The ASME Washington Office was open for business.