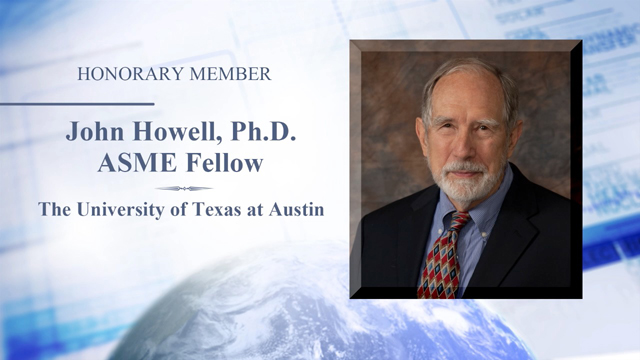 John Howell is among the world’s pre-eminent scholars in the field of radiation heat transfer. He has a distinguished record of contributions to the profession of engineering as a researcher, administrator, teacher and author.

Dr. Howell began his career with the NASA Lewis (now Glenn) Research Center in Cleveland. As an engineer in the analytical section of the Heat Transfer Branch, he carried out fundamental research, mainly in low-g boiling and radiation heat transfer in advanced propulsion systems. He decided to go into academics as the lunar program wound down and joined the faculty at the University of Houston (UH) in 1968.

In 1978 Dr. Howell moved to the University of Texas at Austin, where he held positions including mechanical engineering department chair, director of the Center for Energy Studies, associate dean for research and director of the Advanced Manufacturing Center in the College of Engineering. Since 2010 Dr. Howell has been Ernest Cockrell Jr. Memorial Chair Emeritus in the department of mechanical engineering.

Dr. Howell continues research with graduate students and is preparing a new (sixth) edition of the text Thermal Radiation Heat Transfer. He has also published three books on the history of technology.