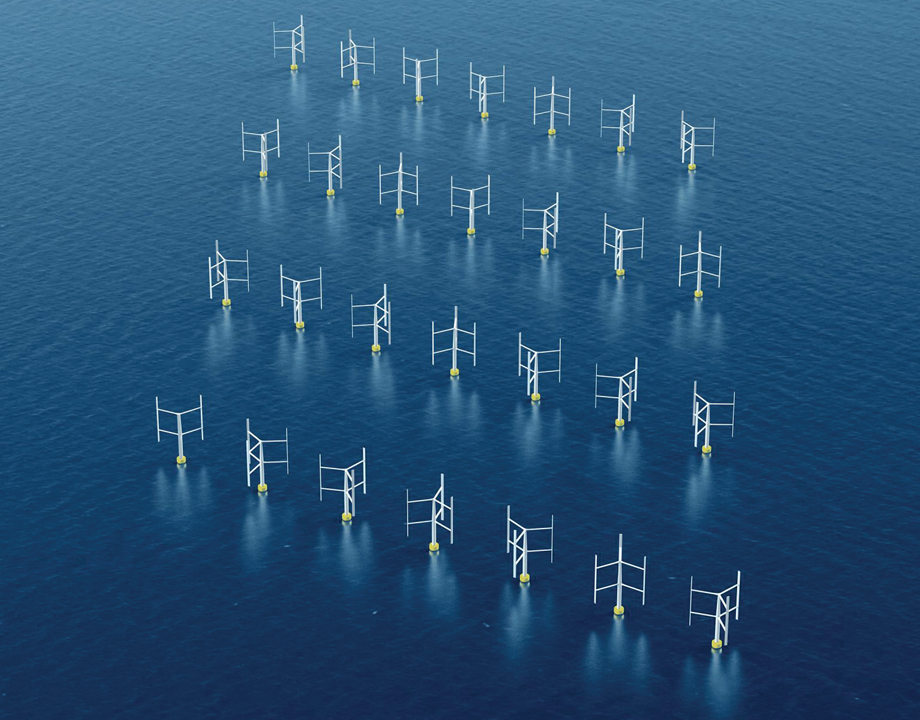 When working together and arranged properly, vertical-axis turbines have the potential to outshine horizontal turbines. Image: Ørsted

Whether on land or at sea, wind turbines have a problem. As Ørsted, the world’s largest developer of offshore wind farms, admitted in 2019, horizontal axis turbines create a tremendous wake—enough that the company had to dramatically alter their energy production estimations. Where a single turbine has an efficiency of about 50 percent, that number can drop down by up to 40 percent when that same turbine is second in line on a wind farm. To avoid the turbulence of an upwind turbine (of 10 MW with a blade span of 150 meters), a downstream turbine would have to be some three kilometers away. That would make for a pretty massive farm.

“Just saying, ‘OK, we have the wake effect, and we can’t do anything about it,’ is not a suitable way forward,” said Iakovos Tzanakis, a professor of engineering materials at Oxford Brookes University. Tzanakis and undergraduate student Joachim Toftegaard Hansen knew there had to be a better way. So they started looking into vertical axis wind turbines as an alternative.

With perpendicular-to-the-earth blades that circle a tower—merry-go-round style—a lone vertical axis turbine harvests energy from the wind differently, but not more efficiently, than its horizontal brethren. A single vertical turbine has an efficiency in the range of 35 to 40 percent (though vertical turbine researchers are sure that number will soon reach 50 as well). But, as Tzanakis and Hansen demonstrated in a paper published in Renewable Energy in June 2021, when working together—and arranged properly—vertical-axis turbines have the potential to outshine horizontal turbines.


Tzanakis and Hansen ran some 11,500 hours of computer simulations of 30-odd configurations of vertical turbines. They found that the optimal arrangement of vertical-axis turbines turns out to be having turbines three diameters from each other, offset by 60 degrees. This setup increased the turbines’ efficiency by 15 percent. It also meant that the turbines could be more tightly grouped in a much smaller farm than horizontal turbines would allow.

The increased efficiency comes from the way they take energy from the wind.

“They suck some air, then they blow some air,” Tzanakis said.

Where horizontal axis turbines generate a funnel-like wake that stretches like a contrail, the wind is less turbulent after it passes vertical axis turbines. Tzanakis likens the effect to a game of wind soccer, or maybe foosball. “It’s like they are passing an air ball between players—somehow it works in harmony and you have this overall efficiency.”


With their smaller footprint, shorter height, and greater efficiency when working together, vertical turbines may be the perfect solution for offshore wind farms.

In Greece, for example, there is a lot of tension between the government and islanders. Tourism-dependent citizens are afraid that the horizontal wind farms the government hopes to build would mar the skyline, putting business in the doldrums.

“If you destroy this coast, this nice scenery—the blue sea and the blue sky—it may affect the tourist industry,” Tzanakis said. “Vertical axis turbines would be a great solution for these islands. For the same megawatt they are shorter in height and can’t easily be seen from the coast.”

They have the potential to occupy 100 times less space.

Of course, a hundred-billion-dollar industry is not likely to switch from a mature design to a radically new one overnight. “We are not here to overturn everything and put aside horizontal axis turbines,” Tzanakis said. “We believe that a hybrid model can revive the existing low efficiently wind farms and provide the next step for some future perspective on increasing the power density of wind farms.”

And though it is undeniably big business, perhaps the wind turbine industry is less resistant to change than other industries.

“We are talking about, climate, energy, the environment,” Tzanakis said. “It’s above humans, above ourselves—it has the biggest impact. We should treat it seriously and take action.”