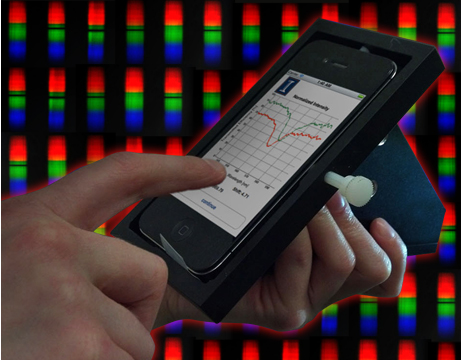 Using a Smart Phone as a Biosensor

A chance conversation some two years ago about augmented reality game apps got Brian Cunningham thinking about how the computing and imaging power of smart phones might be used for something near and dear to his heart.

Dr. Cunningham, professor of bioengineering and of electrical and computer engineering at the University of Illinois, was meeting with an alumnus who related how the games he developed had been downloaded by millions.

“I started thinking that there must be something you could do with a smart phone for medical use,” saysCunningham, whose area of research is biosensors.

With little or no funding available, Cunningham proposed his idea to engineering students looking for a required senior project, and five volunteered. Work since then has produced a first generation device using a smart phone that promises to offer a wide range of biosensing capabilities on-location, outside of a laboratory.

Led by Cunningham, the student team came up with a way to use the camera in a smart phone as a high-resolution spectrophotometer for performing some of the most important and common tests in biochemistry and molecular biology. The project is so promising that it received a grant from the National Science Foundation, and work now has started on the next generation device.

In addition to having sensing capabilities for the medical field, such as detecting toxins, proteins, bacteria, viruses, and the like, the device could also be used in the environmental and food safety areas for tests such as on-location identification and tracking of groundwater contamination and quality control for food and food ingredients.

The device consists of an app and an attachment to the phone that the team calls a “cradle.” This wedge-shaped attachment that fits on the back of the phone contains optical components, lenses and filters, and a compartment where a sample is placed. It is positioned to allow the phone’s camera to measure the spectrum of light coming through the sample and into the camera and provides a result in just a few minutes.

According to the university’s website, the cradle, holding about $200 worth of optical components, provides a result as accurate as that from a $50,000 lab spectrophotometer.

Cunningham says there were times when things didn’t work, and the team had to back up a step and try again. For example, the team tried to make the cradle out of plastic, but it wasn’t accurate enough to hold all of the lenses and other components in place to get a good spectrum. So the team went to a machine shop and had one made out of aluminum. “That worked really well, and now I think we could make a plastic one since we know how all the components come together,”says Cunningham.

The prototype works for the most commonly used biosensor tests for personal diagnostics: the ELISA, or enzyme-linked immunosorbent assay, that identifies the presence of a substance by a color change. The team, now with new members because the first team graduated, is focusing on showing how the smart phone works with a representative number of the various ELISA tests, for example, for HIV, for cancer and others.

With the NSF funding, the team is building a next generation device that will include an app and cradle capable of doing other types of tests, such as those that involve shining a laser at the sample and detecting light given off by the sample.

“Some of the tests we want to do involve detecting DNA, for example, detecting DNA that’s present from a virus or DNA that would tell you whether a certain strain of bacteria is resistant to antibiotics,” Cunningham says. “There are certain tests where you want to detect a DNA sequence and the output of that is fluorescent. Our new system incorporates a green laser pointer and the ability to shine a laser at the sample.”

The first device had to be held up to a light bulb or the sun to get the light to come through a pin hole. With the next one, the idea is to use an internal LED of the phone itself as the light source, he explaines. “It’s more self-contained.”

Cunningham says he hopes, perhaps a year from now, there may be something commercially available that could be used for tests other than medical testing, which will take longer for regulatory approval.

For Further Discussion
I started thinking that there must be something you could do with a smart phone for medical use.Brian T. Cunningham, University of Illinois at Urbana-Champaign