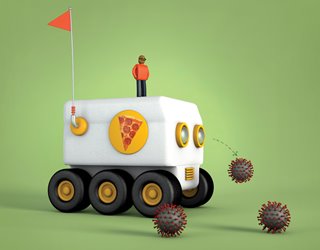 Using Robots to Deliver the Goods

In the spring, when the reality of the COVID-19 pandemic finally sank in, people realized that interactions as benign as accepting a delivered pizza could carry the risk of virus transmission. Enter the delivery robot.

The concept had been kicking around for a few years: Perfecting fully automated self-driving vehicles is a difficult challenge, but scaling back the ambition in terms of speed, size, navigation, and obstacle avoidance would enable companies to release products today, not 10 years from now. Such small-scale self-driving robots would by nature be limited in function, so finding the right application would be paramount.

Starship Technologies was started in 2014 in Estonia by two founders of Skype, who saw automated delivery as a perfect role for self-driving vehicles.

Unlike the delivery drones envisioned by Amazon, a ground-based vehicle moving at pedestrian speed would require less energy and computing power to accomplish its goal, making the technology easier to achieve. 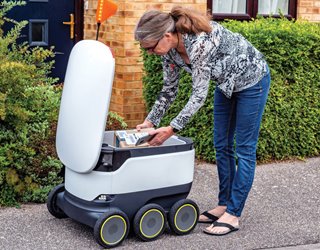 The robot travels over sidewalks at around 4 mph to deliver hot food within a couple-mile radius.
“The technology is similar to self-driving cars, but not as expensive,” said Ahti Heinla, the company’s chief technology officer. “When traveling at 4 mph on the sidewalk, we can safely stop within inches if needed. An autonomous car traveling on at 70 mph on the freeway doesn't have the same luxury.”

The first robot prototype was created a month after the company was founded.

The company had robots up and running in a couple cities prior to the pandemic. Businesses, which use them for deliveries, receive orders just as they would for conventional delivery. Once the order is ready, it is placed in the insulated compartment of the robot, which looks like a large picnic cooler mounted on six wheels, and locked up. The robot is given the coordinates for the destination and off it goes.

The robot has a carrying capacity of around 20 pounds, about the same as two large bags of groceries.

Using a combination of GPS, cameras, and ultrasonic sensors, the robots navigate through a neighborhood that had previously undergone extensive mapping to reveal features such as curb cuts in the sidewalk. Unlike self-driving cars, the Starship robots travel on sidewalks except to cross streets. Sensor input enables the robots to detect and navigate around pedestrians, cars, and other temporary obstructions.

When the robot reaches the destination, the customer receives an alert via their smartphone, and they can meet the robot and unlock it through the app.

The widespread lockdowns forced by the pandemic coincided with an expansion of the service. In addition to college campuses, where the robots had been delivering meals from university food services and local restaurants, a market in Washington, D.C., uses the autonomous vehicles to deliver groceries to neighborhood customers. At around 4 mph, the deliveries take longer than using a human on a bike or in a car, but the lack of human-to-human contact (or guilt for ordering during a rainstorm) was a key selling point.

“Our service has gone from a convenience to a necessity for many,” Henla said, “and we’ve been humbled by the positive response we’ve received.”

The robots were, in fact, warmly welcomed by customers, though there were some reports of children hitching rides on the bots as they cruised down the sidewalk.

See who the other winners are in Video: 2020 Emerging Technology Awards