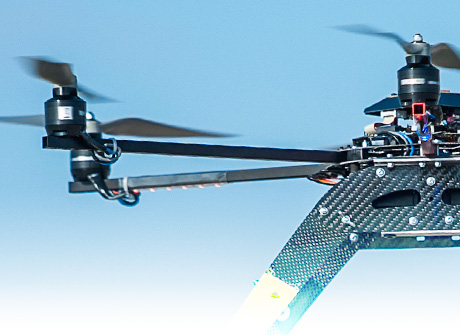 Imagine a small, unmanned aerial vehicle (UAV) hovering over an apple tree, extending a robotic arm, and plucking an apple from the tree and depositing it into a container as similar aircraft do the same across a vast orchard. Seem farfetched? Not according to Dr. Paul Oh, a professor in Drexel's College of Engineering and head of the mechanical engineering and mechanics department. Oh's research group, with the help of a three-year National Science Foundation grant, is focusing on developing "Mobile Manipulating UAVs" with robotic arms and hands capable of performing near-ground tasks.

This is just one of the many commercial applications for UAVs being explored by a number of groups. With the demonstrated success of UAVs for military surveillance and reconnaissance missions and weapons deployment, researchers are envisioning innovative civil and commercial applications for UAVs. Interest is growing in using UAVs for aerial photography, surveying land and crops, monitoring forest fires and environmental conditions, and protecting borders and ports against intruders. According to the FAA, in the U.S. alone, approximately 50 companies, universities, and government organizations are developing and producing around 155 unmanned aircraft designs.

The FAA's main concern about UAV operations in the National Airspace System (NAS) is safety. The NAS encompasses an average of more than 100,000 aviation operations per day, including commercial air traffic, cargo operations, and business jets. Additionally, there are more than 238,000 general aviation aircraft in the system at any time. It is critical that aircraft do not endanger other users of the NAS or compromise the safety of persons or property on the ground. The FAA, under orders from Congress in a bill signed into law Feb. 14, 2012, by President Obama, is expediting the expansion of domestic drone use.

The U.S. Department of Homeland Security already employs a large fleet of domestic surveillance drones used to patrol borders in Texas, Arizona, Florida, North Dakota, and Washington state. The drones are used for a wide array of border enforcement operations, including looking for drug tunnels and interdicting suspected drug smuggling boats. Drones have also been used for reconnaissance after natural disasters such as floods. For farmers and ranchers, drones could bring a safer method to spread pesticides and fertilizer across their fields of crops or check on cattle and fences. Law enforcement is eager to use the unmanned aircraft for surveillance. Utility companies see potential benefit in using drones to monitor oil, gas, and water pipelines or to perform reconnaissance for hazardous waste cleanup.

With robotic limbs as proposed by Oh and his research group, someday UAVs may be able to perform tasks such as welding, replacing rivets in bridges, performing search and rescue missions, or searching through shipping containers and vehicle trunks during border inspections. The possibilities seem endless and so do the engineering challenges. One of Oh's challenges is to keep the flying robot stabilized and in the air while accounting for the variable torque and thrust required by the robotic limbs to perform their task.

"The most significant challenge is to compensate for reaction dynamics. As the arms dexterously manipulate objects, interaction forces arise that can destabilize the UAV and lead to crashes," explains Oh. "An analogy is to imagine a scuba diver turning an underwater valve. The diver contorts his body and aggressively kicks his legs in order to throw his body weight into turning the valve with his arms. Likewise, a UAV must "swim" through air and may have to vector its body in order for the arms to dexterously manipulate an object with its arms," he adds.

Another key engineering challenge is the avoidance capabilities of UAVs while under autonomous flight in the NAS. Collision avoidance is not as simple as dodging an approaching aircraft. The sense-and-avoid system must consider whether a maneuver will put a UAV on a collision course with other nearby aircraft. For UAVs to be fully integrated into airspace with manned aircraft, sense, detect and avoid systems must perform the same essential conflict and collision avoidance functions as a human pilot.

Currently, the FAA has a strict process of licensing agencies to operate UAVs within the U.S., and limits where they can be flown for safety reasons. Congress is encouraging more use of drones domestically and has mandated that the FAA identify six test sites in 2012 and integrate drones in the U.S. aviation system by 2015.

The most significant challenge is to compensate for reaction dynamics; as the arms dexterously manipulate objects, interaction forces arise that can destabilize the UAV and lead to crashes.Dr. Paul Oh, professor, College of Engineering, Drexel University