Top 6 Mechanical Toys of All Time

Top 6 Mechanical Toys of All Time 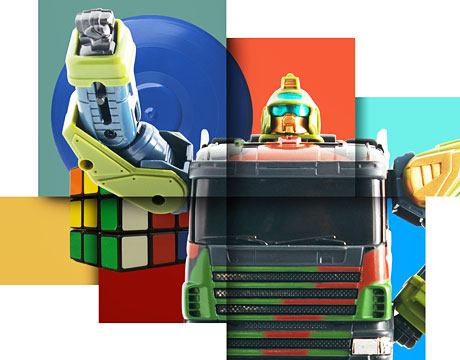 It’s one of the magic words of childhood: Toys. But people often forget that many toys actually have a mechanical core. We enlisted the help of Barry Kudrowitz, who co-founded the Massachusetts Institute of Technology Toy Lab, and who is now an assistant professor at the University of Minnesota, to pick the best mechanical toys of all time.

They’ve been around forever, but there’s a reason for that, says Kudrowitz. “So many toys are tops and that is purely a mechanical thing," he says. "The interaction itself is playful and the machines behind it are playful. They keep going back to it every year because it feeds into creating new toys, a story, a character, or competition adding a layer.” He cites tops that battle each other in arenas as a prime example, ranging from Wingo to Beyblades.

An explosion in the 1980s that lives on in the mind games of today. “The cool thing about the Rubik’s Cube is it’s seemingly simple but it’s actually a very difficult challenge,” Kudrowitz says of this invention involving a pivot mechanism. “It’s not like you use one 20 times and it’s no longer difficult. Also, it was portable enough to be [in] a ten dollar price range, yet so original.” Kudrowitz says you can see the influence of this physical puzzle toy in many others, even possibly in Perplexus.

Kudrowitz cites this creation as critical in the area of “toys as moving structures.” He adds, “It kept them as simple mechanisms like a roller coaster or a Ferris wheel but gave a kid that sense of accomplishment. I think it may have been the first plastic connector toy that allowed people to make mechanisms into structures that would move and move through them.” According to Knex.com, wheels, pulleys, and gears were added to the mix only later.

We return to the 1980s with a famed talking bear who stood out partly by reading stories along with his young owner. “This was a moving, talking animal that was a clear predecessor for products like a Furby, toys that could sense something,” says Kudrowitz. According to the Toy Industry Association, this largely forgotten bear was the top-selling toy of 1985 and 1986.

This was a big breakthrough in “controlling magic from a distance,” says Kudrowitz. “This radio control might have been used for other purposes and then was ‘toyified,’” he says. “Today, RC cars go through your phone like Sphero and can drive with an app on the iPhone. The RC car ultimately was part of declaring that you didn’t need a track anymore because now you could go wherever you want.”

Often remembered now as a movie series, Kudrowitz says Transformers were a juggernaut of creativity to the toy community. According to Collectorsweekly.com, this toy really began in 1950s Japan, where stories were spun of robot protectors controlled by humans. As far as transforming robots, the site says it “dates at least to 1965, when Ozamu Tezuka, creator of Astro Boy, introduced the character of Magma (called Goldar in the U.S.), a gold sentient robot that could transform into a rocket.”

Simple and yet it continues to be a seller, thanks partly to variation sports such as Ultimate Frisbee, a spin on football. “There are aerodynamics that build into it. It can rise, and the lip separates it from a discus,” Kudrowitz says. “You even see some variations in foam discs but in many ways this is like a yo-yo: hard to duplicate and it continues to be enjoyed.”

For Further Discussion
The RC car ultimately was part of declaring that you didn’t need a track anymore because now you could go wherever you want.Prof. Barry Kudrowitz, co-founder, MIT Toy Lab