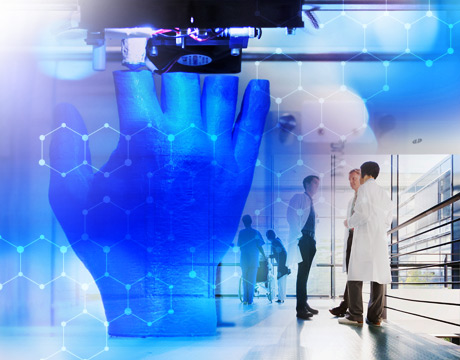 Every year, 3D printing offers more and more promise in the healthcare field. And while the ultimate goal of printing whole complex organs for transplants may still be decades away, 3D printing is helping to save and improve lives in ways - and in places - never imagined just a few years ago.

Now, hospitals across the U.S and around the globe are setting up 3D printing labs within their complexes so that healthcare professionals can incorporate the process into a normal day’s work. In fact, Ryan’s lab has collaborated with more than 15 institutions spanning six countries. The work primarily focuses on printing patient-specific models prior to surgery to look at a patient’s specific anatomy, and in the past four years, Ryan’s lab has 3D printed more than 300 hearts.

“A doctor can look at and practice on a customized 3D printed model prior to surgery. Then we potentially have a better surgical outcome,” Ryan said. He hypothesizes that the doctor is better trained, there will be less time in the surgical suite, less time for a patient to be under anesthesia, less time to have patients open to the environment. “Hopefully, it reduces morbidity and mortality,” he said. A clinical trial is now underway to better understand the impact of models on surgical outcomes.

Spurred on by interest from non-profits, 3D printed patient-specific prosthetics, often produced on low-cost, MakerBot-style printers, are having a major impact, especially in developing countries. The prosthetics come with the latest technology and are changing the lives of people who in the past had no hope of ever receiving these devices.

Organizations like ROMP (Range of Motion Project) and Not Impossible use 3D printing to build low-cost, high-quality prosthetic limbs and orthotic braces for patients who otherwise would never receive them. E-Nable encourages engineers and others the world over to build hands and arms on their own 3D printers in their spare time, using E-Nable’s open source designs. The organization estimates it has delivered about 1,800 hands so far, mostly to children, but it believes that another 1,800 have been produced outside of its documented process.

Thousands of 3D printed replacements for bony body parts: knees, hips, ankles, parts of the spine, and skull, are implanted every year, and the future holds more promise with 3D printed patient-specific parts. Although not generally approved by the Food & Drug Administration, some have taken place under FDA’s emergency clearance process.

One widely publicized was a tracheal splint developed at the University of Michigan for an infant born with a congenitally defective trachea so weak that it collapsed even after conventional treatment. The bioengineering-surgical team used a CT scan of the infant to 3D print a replica of the infant’s anatomy to create a splint to wrap around the weakened trachea. Tissue from the infant’s bronchus was sewn inside the splint. The device was made of a material similar to that for absorbable sutures so that as the child’s trachea repaired itself it would gradually be absorbed.

Implants such as these can leverage 3D-printing’s properties, such as customization and better integration as the patient’s own tissue starts to grow, Ryan said. “With traditional printing, you can get good integration on the surface but not throughout.”

3D printing is enabling high-quality, rapid, low-cost production of everything from dental implants to hearing aids, from prescription eyeglasses to headgear that fit better, work better, and offer better protection.

Although some trace the origins of tissue engineering back to the mid-1600s with the identification of cells, it’s often considered a young field as a modern scientific discipline since it began ramping up toward the end of the last century. With the development of 3D printing, the prospect of being able to reproduce human organs out of biomaterial suddenly seemed more than a pipe dream.

Taking a step at a time, researchers started with simpler structures such as skin, blood vessels, cartilage, bone, and the bladder, along with parts of more complex organs, such as heart valves, and have made considerable progress.

“Part of the challenge of printing complex organs is that organs need oxygen and nutrients,” said Ryan. “The challenge is printing blood vessels at the same time as printing organs. Outside of that, it’s also the concept that an organ isn’t just tissue but what you might refer to loosely as memory, so your heart isn’t just a collection of cells, it’s also the tissue that supports the tissues that lead to thousands and thousands of heartbeats.”

A doctor can look at and practice on a customized 3D printed model prior to surgery. Then we potentially have a better surgical outcome.Dr. Justin Ryan, Phoenix Children’s Hospital