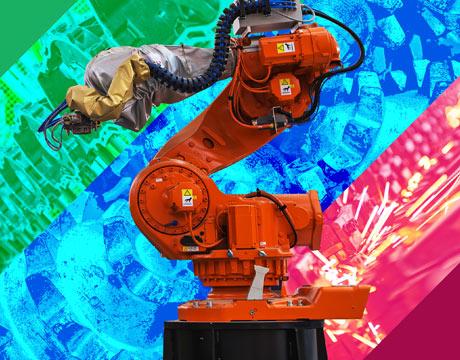 tomation and robotics continue to enter the US manufacturing workspace. The benefits are plentiful: higher quality, faster production, less waste, and greater safety (removing employees from hazardous working conditions, handling heavy parts). Robots are used mostly in automotive and aerospace, especially for the handling and assembly of large parts. As companies continue to see big benefits from using robots on the factory floor, they are starting to invest in smarter, smaller, more collaborative robots for more delicate or complex operations. The following is a list of the top robot jobs that are currently emerging in factories.

With more complex assemblies and tight tolerances, accurate inspections are a must, both in-process and for the final product. Robots equipped with cameras, laser scanners, and ultrasonic and metrology equipment can quickly inspect products and record the data.

Metal parts welding for assembly (for example, turbines) must be performed with precision. “When using exotic metals, such as titanium and nickel-alloys in motors,industrial robots are a must in order to do effective and accurate welds,” states Mathieu Bélanger-Barrette, a production engineer at Robotiq, a manufacturer of industrial robots.

Applying sealant, paint, or other coatings on large fuselage or framing parts is difficult for a manual operator, because of the size of the parts. “By putting robotic arms on rails, working cells can cover distances from 30 to 40 feet, several stories high,” says Bélanger-Barrette. Since painting robots are equipped with flowmeters, industrial painting robotscan apply material without leaving behind drips, inconsistencies, or overspray.

Advances in artificial intelligence, computer vision, microelectromechanical systems sensors, and semiconductor technologies have enabled industrial and service robots to work alongside humans to help assemble products across a wide range of industries, from aircraft engines to delicate electronics. These robots can almost be the boss, with their vision systems and other sensors, they can “see” if their human partners are assembling products correctly.

March of the Robots

More advanced generations of collaborative robots are on the way: smart, mobile, collaborative, and more adaptable. Humans are not strictly necessary, as robots can collaborate effectively with other robots. For example, Great Wall Motors, a Chinese automotive plant, operates a robot-to-robot production line that is one of the most productive ever created. One robot handles and positions the panel, and the other welds it into place. “This robotic line performs more than 4,000 welding operations on the car body in an 86-second cycle time, including the transferring operations,” says Bélanger-Barrette.

In 2015, Foxconn, the Taiwanese company that manufactures the iPhone and other major electronics devices, announced it plans to achieve 30 percent automation of its Chinese factories by 2020. Foxconn also said it had automated away 60,000 jobs in one of its factories, part of an ongoing process to replace humans responsible for “many of the manufacturing tasks associated with our operations.”

Job losses from robot adaption are a real concern.

According to the World Economic Forum, current robot trends could lead to a “net employment impact of more than 5.1 million jobs lost to disruptive labor market changes over the period 2015–2020.” And these aren’t just factory jobs. Positions most at risk for being replaced in the future are “administrative and routine white-collar office functions.”

As robots become less costly and more accessible, writes reporter James R. Hagerty in The Wall Street Journal, they should help level the playing field between smaller manufacturers and corporate giants. By reducing labor costs through automation, the U.S. and other high-wage countries may be able to bring back “some of the processes that have been ceded to China, Mexico, and other countries with vast armies of lower-paid workers,” says Hagerty.

In December 2016, the IDC released its “Worldwide Robotics 2017 Predictions” report, which highlights key drivers that will likely shape the development of robotics in the planning horizon of 2017 through 2020.

"Robotics will continue to accelerate innovation, thus disrupting and changing the paradigm of business operations in many industries,” writes Jing Bing Zhang, research director for IDC for the Asia/Pacific region. “We expect to see stronger growth of robotics adoption outside the traditional manufacturing factory floor, including logistics, health, utilities, and resources industries. We encourage end-user companies to embrace and assess how robotics can sharpen their company's competitive edge by improving quality, increasing operational productivity and agility, and enhancing experiences of all stakeholders.”