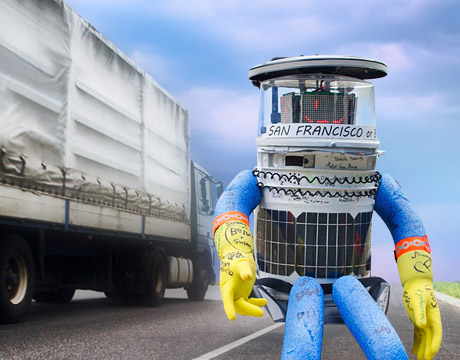 The hitchBOT on his way to San Francisco. Bot image: Ryerson University

Thumbs Up for the Hitchhiker Robot

It’s not as common as it once was, but occasionally you’ll see a hitchhiker on the road, thumb out, hoping to trade slow goings for wheels. But if a driver encountered the traveler in this story, the experience would be somewhat different.

The hitchBOT was just what it sounded like, a robot hoping to find miles of road, in many passengers’ seats, with many different drivers.

“Working with new media technologies, we were interested in an unusual situation for a social robot,” says David Harris Smith, assistant professor in the department of communication studies and multimedia at McMaster University. “We thought it was important to have linguistic and speech recognition and we liked the idea of setting a robot loose in an unsupervised setting. That was the beginning, that you could create something that was somewhat autonomous. There was a period of time that we had this idea and then had this eureka moment: ‘Let’s set a robot hitchhiking.’”

The face of the robot was a four-sided LED system and it had animated graphics that ran off of an Arduino that changes the graphics. The hitchBOT also had a GPS unit to track itself and post information to databases, along with voice recognition and Lithium batteries providing about seven or eight hours running time.

Unable to walk or move, how did it lift its arm to hitch? A servo motor. “We also had flexible solar panels, which were not sufficient to recharge, but actually could keep the face illuminated and they would also slow down the battery drain and extend battery life,” says Smith.

According to Frauke Zeller, assistant professor at Ryerson University: “We thought about what kind of personality the robot should have and what they should talk about. We went for having a fun robot that wants to explore the world and thought what would humans ask? We started to define its personality and wrote dialogues. We even taught the robot a few jokes.”

The dialogue modeling was done with a program called Cleverscript and they could write their own customized dialogue anticipating conversation types. “We also were able to use the GPS to classify by area,” Smith says. “It could retrieve information about that province or city and it could help add contextual awareness into conversation.”

To start the very first trip, hitchBOT was driven to Halifax and dropped off at the Trans-Canada Highway. “We stepped back and in two minutes hitchBOT started off on a camping trip,” Smith says.

Zeller said hitchBOT became a magnet for people, heavily followed through social media. Traveling in 2014 and 2015, hitchBOT was invited to the Netherlands, by an artist to promote art in the region, and Germany, to be accompanied by a television team as part of documentary (hitchBOT didn’t hitchhike to get to these destinations). Sadly, hitchBOT finally met its end in Philadelphia, where it was vandalized and destroyed.

“We never found out who did it and why they did it,” Zeller says. “We were surprised by then because it had been out in the public so long. But what was also surprising in a good way was all the support we received from social media. We didn’t know thousands of people would post how sad they were, but they did.”

We were surprised [by the vandalism] by then because it had been out in the public so long. But what was also surprising in a good way was all the support we received from social media.Prof. Frauke Zeller, Ryerson University