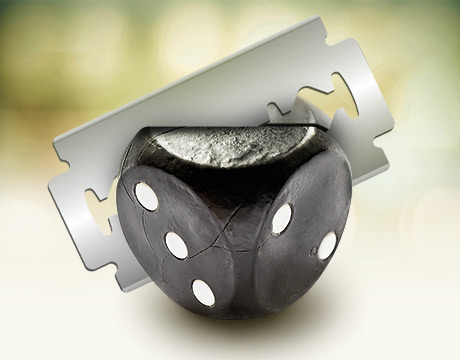 The simplest Platonic solid, the tetrahedron, has four faces, each an equilateral triangle. How, then, can you build a solid object that will roll and randomly turn up one of only three faces?

The puzzle intrigued Joseph Toumanios, a mechanical engineering student at the New Jersey Institute of Technology, Newark, NJ. He said it started in his freshman year, while he and a friend were playing a game that involved rolling dice of various shapes. They started speculating: Was it possible to make a three-sided die?

The friend said no. Toumanios, on the other hand, found the challenge of a three-faced die irresistible. He learned 3-D modeling software so he could try to create one.

What began as a light-hearted diversion ended with two workable solutions, which Toumanios calls "Trice." He has printed a few prototypes of each design and has even applied for a patent. Both designs are essentially cubes adapted to show only three faces. The first orients each face on a plane diagonally joining two sides of the cube.

The second uses a wire-frame cube. The surfaces that present the numbers are on a prism connected diagonally across the void inside the wire-frame. Both versions of Trice will roll and bounce like conventional six-sided dice. Trice are unbiased and always display a single number, randomly rolled and face up.

Toumanios said that the solution was always in his head, but it took him six or seven months to fully develop the two designs. It took another six months of working through theoretical and experimental data to build a statistical case for Trice—that they are a better design than a triangular prism, any object with curved edges, or even a six-sided die with two sets of numbers.

Toumanios, now a junior, said that the three-sided dice could be a good addition to Dungeons & Dragons and other role-playing games. Publishers of the games could add Trice to their dice collections, and sell them in various colors and styles.

He also believes that the form can be used in a satellite. With a solar panel on each face, one side can always be exposed to the sun. It could supply more power than a cube arrangement, and be simpler than a sphere.

Toumanios currently has six working prototypes (three of each design), generated by 3D printing. The first two were created to realize the physical design and the other four were created with slight adjustments in size so that they may be more clearly seen and used.

Toumanios said he would like to sell the design to a company one day, but he said his main target right now is “to get the design out there, to the degree that it’s a common household object, familiar to the average person. Kind of like a deck of cards, or a sponge.” He said one avenue may be to find a casino willing to hear the statistics behind a new dice-based game that could draw in a new crowd of players.

“It could be made for beginners or those willing to take more of a risk depending on dice quantity,” he said. “Plus they would be able to sell the dice exclusively from their casino.”

For Further Discussion
I want to get the design out there, to the degree that it’s a common household object, familiar to the average person. Kind of like a deck of cards, or a sponge.Joseph Toumanios, New Jersey Institute of Technology