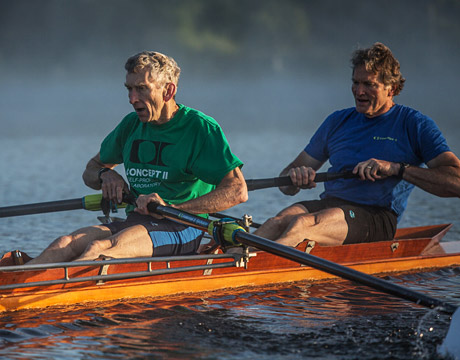 These Dreissigacker brothers have been quite the rowers. Older brother Dick found his way on to the 1972 Olympic team and both he and younger brother Peter were in the 1976 Olympic trials. But both these men, who also happen to be engineers, later took on a new challenge: making oars better. The younger brother took some time to explain how these co-founders of Morrisville, Vermont-based Concept2 pushed into oar innovation.

Hey, You Forgot the Oar

“One of the interesting things is oars at one time were left behind in terms of rowing equipment,” Peter says. “Everyone seemed more interested in the boats. There was a time when boats and oars all were made of wood but then they began using Kevlar and more for boats. We reinforced oars with carbon and made a lightweight blade portion, a hybrid that was somewhat lighter than a full oar. The idea was to lighten the inertia of the oar as you go through the stroke. Once we got our feet wet, we had planned on going to the next step and creating a completely synthetic oar which would be a big change.”

The synthetic oar advantage was that it was about 75% of the weight of wood, he says. Other disadvantages of wood was durability and maintenance. “Wooden could have warping and get dings in the varnish,” he says.

1990 saw blade design changes. “Making the blade larger sounds simple but we needed to be able to maximize surface area of the blade and still row functionally,” he says. “The molded shape we started from was basically similar to the late seventies and eighties but we changed the perimeter and it was asymmetric for rowing functionalities.”

The next change partly came from a little out of town: Norway to be exact. “There was a consultant for aerospace companies, who, as a hobby, did a lot of work with sports and efficiency and aerodynamics and hydrodynamics,” he says. “He was from Norway and contacted us and said he had put all this information into computers. We made some tweaks to his input and found it improved our speed. In the water, the tip of his design was more like a space shuttle, more like a blunt point. We chopped off that point somewhat and it helped. In addition to that effect, there was the input of another hydrodynamic guy which helped lead to vortex generating features.”

Rowing with the Younger Generation

A future goal for the company is creating a low-cost oar that would have a strong focus on getting young people involved. “Rowing can be a great alternative sport,” he says. “We’re working on an all-carbon shaft with an injection-molded blade. Our standard racing blade is quite involved with carbon skin and the core material and it’s a costly process.”

The hope is to share a little bit of the rowing passion, which once landed the brothers among the rowing elite and has kept them working together for decades. “Rowing can get you hooked and it’s something you might have a chance to do all the way into later life,” he says. “Rowing is also noncontact and it’s not the same thing stroke after stroke. It’s a complex motion that involves muscle memory and it’s a lot of fun.”

For Further Discussion
One of the interesting things is oars at one time were left behind in terms of rowing equipment. Everyone seemed more interested in the boats. Peter Dreissigacker, Concept2