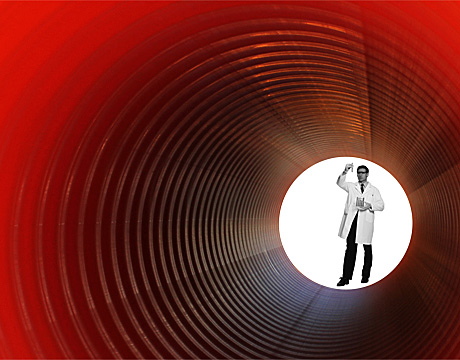 Dr. Gang Chen, Soderberg Professor of Power Engineering in the Department of Mechanical Engineering at Massachusetts Institute of Technology, decided to take a different approach to this problem by first testing whether polymers really are intrinsically poor heat conductors.

"A look at the molecular chain of polyethylene (PE), which consists of covalent carbon-carbon bonds, suggest that heat conduction along the molecular chains should actually be very good," says Chen. "There is also fundamental physical inspiration from earlier work by Fermi, suggesting that one-dimensional atomic chains might have infinite thermal conductivity, as well as earlier experimental studies by others showing that stretched polyethylene can indeed possess higher thermal conductivity."

To test this further, Chen's research team conducted molecular dynamics simulations that proved to support the idea that PE molecules mimic the one-dimensional atomic chain model. They then devised an experimental demonstration and published a paper in the March 2010 issue of Nature Nanotechnology that described their remarkable result—that by aligning their molecular chains, polymers can be just as heat-conductive as most metals.

It is well known that the mechanical and thermal properties of polyethylene can be improved by processing or stretching bulk samples into thin films or fibers, thereby reducing the number of defects and increasing the chain alignment.

To reduce the number of defects even further, Chen scaled down the fiber size (50-500 nm in width and up to tens of millimeters in length) and developed a two-stage heating method to fabricate ultra-drawn nanoscale fibers. A small sample of polyethylene gel was heated to 120 °C on a heating stage and an individual suspended fiber drawn from the heated gel using either a sharp tungsten tip or a tipless atomic force microscope (AFM) cantilever. A second heating procedure then heated the fiber and surroundings to 90 °C to dry the fiber. The fiber was then mechanically stretched (ultra-drawn) at a controllable speed by rigidly fixing the tungsten tip or AFM cantilever to a motorized control stage. The thermal conductivity of the nanofiber was then measured using a sensitive bi-material AFM cantilever, which can resolve power measurements as low as 0.1 nW.

Chen's research confirmed that stretching nanofibers does contribute to the nanoscale restructuring of the polymer chains.

The thermal conductivity of these nanofibers proved to be as high as 104 Wm-1 K-1, about three times higher than previously reported values for micrometer-sized fibers and even higher than that for about half the pure metals, including platinum, iron, and nickel.

Chen attributes this high thermal conductivity to the restructuring of the polymer chains by stretching, which improves the fiber quality toward an "ideal" single crystalline fiber.

"Such thermally conductive polymers are potentially useful as heat spreaders and could supplement conventional metallic heat-transfer materials, which are used in applications such as solar hot-water collectors, heat exchangers, and electronic packaging," says Chen.

Another benefit to thermally conductive polymers is that they would likely be less expensive than conventional metallic heat transfer materials used in many industries. This is especially true for applications where directional heat conduction is important, such as heat-exchanger fins, cell-phone casing, and plastic packaging for computer chips.

"Furthermore," Chen adds, "high-thermal-conductivity polymers may also have other technological advantages that can be applied, because they can be lightweight, electrically insulating, and chemically stable."

Since publishing his paper in 2010, Gang has received many requests for fibers from companies across a range of industries, including fabrics. Luckily for these interested parties and others, Chen recently obtained funding for additional research through the Obama administration's Manufacturing Initiative.

"We can now develop processes to scale up this technology, and hopefully provide samples for real-world applications in the near future," says Chen.

The thermal conductivity of stretched polyethylene nanofiber can be higher than that for about half the pure metals, including platinum, iron, and nickel.Dr. Gang Chen, Soderberg Professor of Power Engineering, MIT