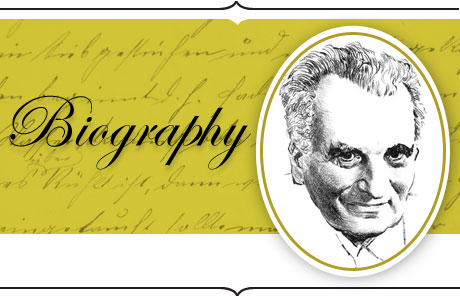 Known as the father of supersonic flight, Theodore von Kármán (1881 – 1963) made major contributions to aviation and space technology, aerodynamics, and improved aircraft performance during an illustrious career.

Von Kármán was born in Budapest, Hungary, in 1881, and as early as six years of age was recognized as a mathematical prodigy. He won the prestigious Eotvos Lorand Prize for the best student in mathematics and science in the entire country upon his graduation from the Minta Gymnasium in Budapest at the age of 16. He graduated in 1902 with high honors from the Palatine Joseph Polytechnic in Budapest with a degree in mechanical engineering. After a year of mandatory military service, he received his doctorate under the tutelage of the famous aerodynamicist, Ludwig Prandtl, at the University of Göttingen in 1908 and remained as an associate professor until 1912.

Von Kármán's interest in aerodynamics was piqued while he visited Paris in 1908 and observed a short flight by Henry Farman in a test airplane, five years after the Wright Brothers famous flight at Kitty Hawk. In his aerodynamics research at the University of Gottingen, he observed the presence of eddies (counter-rotating currents) in the wake of a moving object, now known as the Kármán Vortex Trail. His discovery on the structure of airflow led to further studies on air turbulence that contributed to advances in the design and performance of aircraft. His research further helped establish the improved stability and functionality of swept-back wings.

In 1913, he struck out on his own to become a professor in aeronautics and mechanics at the Technical University at Aachen, Germany, and was soon thereafter appointed the director of the Aachen Aerodynamics Institute at the age of 31. While at Aachen, he met Hugo Junkers and collaborated with him in the aerodynamic design of the Junkers J-1 transport airplane, which was the first cantilevered wing, all metal airplane.

During World War I, he served in the military for the Austro-Hungarian Empire and became the head of research in the air force. At the Military Aircraft Factory in Fischamend Austria, he led the development of the first helicopter, tethered to the ground, that was able to maintain hovering flight. This flying machine was developed to solve problems plaguing the observation balloons then in use.

He first visited the United States in the Fall of 1926 to consult with the Douglas Aircraft Company on the establishment of a new graduate school at the California Institute of Technology Aeronautical Lab. Four years later he returned as director of the school and his laboratory became the most prominent in the world of aeronautical sciences. It later became the present NASA Jet Propulsion Laboratory and he directed America's first governmental long-range missile and space-exploration research program for the U.S. Ordnance Department.

Von Kármán made his first notable contribution to the study of supersonics in 1932 when he developed a new mathematical approach to studying airflow and supersonics that is now known as the Kármán-Moore theory. The theory is still used today.

In 1936, amidst much skepticism, he supported the interests of a group of his students on the subject of rocket propulsion and its applications. Two years later the U.S. Army Air Corps sponsored a project at his lab on the use of rockets to provide super-performance for conventional aircraft.

In addition to his mathematical brilliance, Von Kármán was also an advocate of international scientific cooperation and collaboration. He was responsible for creating the Advisory Group for Aeronautical Research and Development (AGARD), part of the North Atlantic Treaty Organization (NATO), and a group that has played a major role in the aeronautical advancements of NATO countries. One of the educational and research institutes of AGARD became the von Kármán Institute for Fluid Dynamics, a leading aerodynamics laboratory known worldwide.

By the end of his distinguished career, he had published more than 200 papers, advanced scientific collaboration from world leading scientists, developed many unique theories of aeronautical and space science, and played an important role in the creation of supersonic aircraft and ballistic missiles. In 1963, he was awarded the first National Medal of Science by President John Kennedy. He died that same year in Aachen, Germany.

Von Kármán made his first notable contribution to the study of supersonics in 1932 when he developed a new mathematical approach to studying airflow and supersonics that is now known as the Kármán-Moore theory.