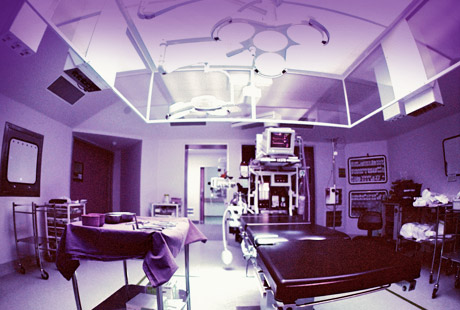 Cool heads prevail in the operating room, and the coolest heads rest on the shoulders of experienced surgeons. It's the "been there, done that" attitude that comes from being exposed to many life-and-death situations, as they often are in operating and emergency rooms.

So even though medical students need to experience these situations, no one is going to let them learn from their mistakes. That's why the medical profession is turning to engineers to develop tools that give doctors crash courses in facing these life-and-death decisions as part of an operating team.

"There's a coordinated sequence of events that has to take place in an operating room," says Leonard Weireter, Jr., a surgeon at Eastern Virginia Medical School who also heads Sentara Norfolk General Hospital's Shock Trauma Center. "If the anesthesiologist, surgeon, and circulating nurse know how to communicate with one another, a lot can get done." Otherwise things can get quickly out of control in an emergency room, such as with cardiac arrest or an allergic reaction. It may also occur if a member of the operating team misreads an instrument or misunderstands a command.

Today, medical students and residents learn to cope with life-threatening emergencies by living through them. They stand beside skilled practitioners, the same way apprentices learned from their masters for hundreds of years. They watch, assist, and ultimately take the scalpel into their own hands under the watchful eye of an experienced surgeon.

Yet even the busiest hospital presents only a limited range of experiences for any given type of operation. While human beings vary widely, most operations follow a routine set of procedures. Doctors may go through years of medical school and residency, and never encounter more than a handful of true emergencies. They may never confront a life-and-death decision until they are out on their own.

Taking lessons from other professionals who must sometimes face critical decisions such as pilots, chemical and nuclear power plant operators, or military officers, the medical profession has begun to use advanced simulations and mechanical feedback to train doctors. The work is still in its very early stages. Yet the new technologies promise interactions that will blur the distinctions between reality and models in virtual space. Doctors, nurses, and paramedics learn and practice procedures on simulators until they become proficient.

The simulators then vary symptoms to depict medical emergencies that most medical personnel rarely encounter. Future doctors, for example, can rehearse emergency procedures the same way pilots use simulators to learn how to pull out of a spin or fly with a damaged engine. Over the past decade, several companies have introduced simulators. Most consist of a plastic and rubber mannequin, a haptic feedback system that simulates the resistance of medical instruments moving through the body, and imaging systems that show the locations of the instruments.

Today's medical simulators have limitations, but they are moving rapidly into the medical mainstream. Two years ago, for example, the Food and Drug Administration approved a carotid stent, developed by Guidant Corp., Indianapolis, IN, that expands blocked arteries in the neck. Before doctors could perform the risky procedure implant, the FDA required doctors to undergo four hours of simulator training.

"This is the first time that FDA required simulator training," says Mark Scerbo, a professor of psychology at Old Dominion University, Norfolk, VA, and co-director of the National Center for Collaboration in Medical Modeling and Simulation. "This may be the start of a new model for training doctors. Simulations can also let us test new devices and procedures without putting patients at risk." For example, its debridement system, which simulates the removal of a patient's damaged or infected tissue to improve the healing process, uses virtual reality to walk students through cleansing large surface wounds.

Inside that virtual environment, medical students can interact with simulated doctors and nurses while they operate on a mannequin. "For example, one of the most serious issues in the field is intubation, the placement of a flexible plastic tube into the windpipe to maintain an open airway. Students can practice this procedure numerous times on mannequins without choking the patient," Scerbo says.

The use of mannequin simulators also coincided with the advent of minimally invasive, or laparoscopic, surgery. Instead of slicing open a body, surgeons insert cameras and surgical instruments attached to long rods through small incisions. Surgical simulations are typically robotic arms that work in reverse: Instead of applying force to an object, they provide force feedback to the operator. So when a student moves a clamp at the end of a robotic arm, the haptic system calculates the amount of force to apply against that motion by gauging how the scalpel interacts with a computer-generated model of tissue in which it moves.

"For years, we thought medical simulator haptics had to be incredibly precise," Weireter said. Medics, paramedics, and nurses must learn to clean the wound and remove dead tissue, glass, and other foreign objects to prevent gangrene and infection. The virtual operating room creates even more complex interactions between real and virtual space than the debridement system. "If you look at advances in safety made in other high-risk domains—aviation, nuclear power, military operations—they were achieved by people who understood the entire environment in which they perform.”

As the virtual operating room evolves, it is expected to drill students in critical thinking and communications skills. They will see more and more varied emergencies than the cases that come through the hospital doors on their shift. Equally important, the virtual operating room gives researchers a tool to study and understand how and why surgeons make mistakes. "We can look at the sources of errors that creep into procedures and design countermeasures," Scerbo says. "We can build better systems that match the capabilities of human users without overloading or underloading them."

Today's medical simulators have limitations, but they are moving rapidly into the medical mainstream.