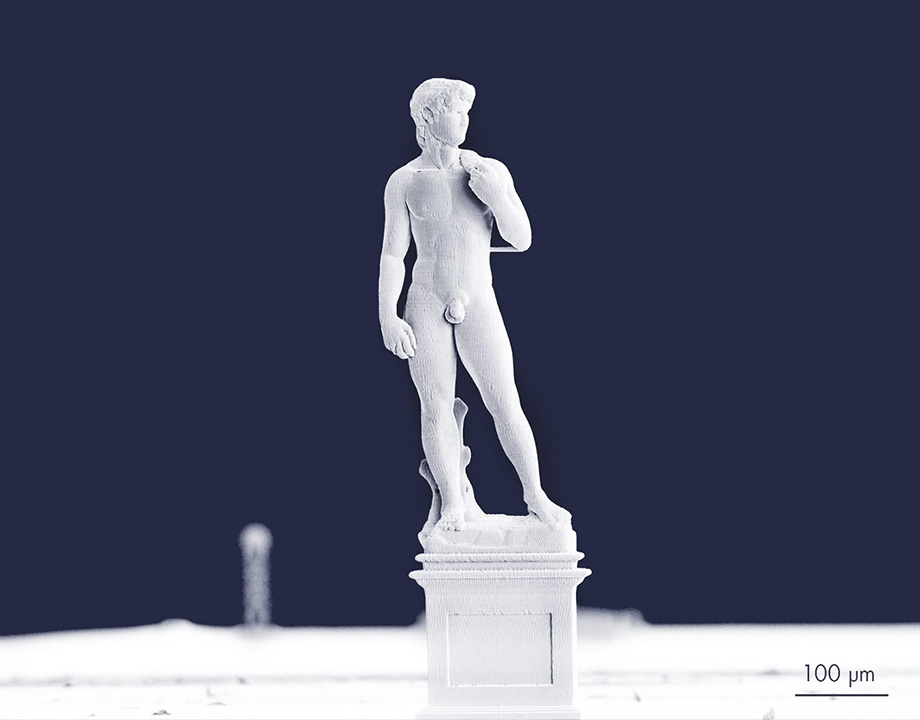 To properly goggle at the three-dimensionally printed statue of Michelangelo’s David, you’ll need a microscope. When the tiny David comes into focus, you’ll see the exact replica of the masterpiece Michelangelo created in the early 1500s.

The familiar solid marble David, displayed in the Galleria dell'Accademia in Florence, Italy, is nearly 17 feet tall and weighs about 12,480 pounds. The miniature copper printed replica is hollow, 1-millimeter tall, and weighs 12 micrograms.

Giorgio Ercolano, an R&D process engineer at Exaddon, an additive manufacturing company in Switzerland, made tiny David. He used a miniature-printing method originally developed by Tomaso Zambelli, a professor at ETH Zurich, Switzerland’s top technology university, where he heads the laboratory of biosensors and bioelectronics 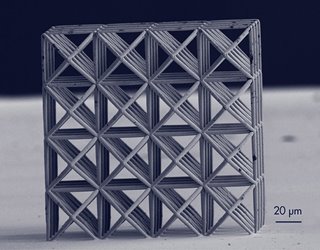 The Ceres printer uses electrochemical deposition to produce miniature parts, like this lattice cube. Photo: Exaddon
“We wanted to test the capabilities of the machine and, also, why not?” White said. “Everyone recognizes Michelangelo's David, so when they realize that they’re looking at a David only 1-mm tall it shows just what we can do.”

“The 1-mm David was in fact at the upper size limit of our area of specialization,” he added.

The super small David was printed in one session without the need for supports or templates, Ercolano said. For the statue’s specifications, he called upon an open-source CAD file that he sliced. He then sent those slices directly to the printer.

Recommended for You: Podcast: Engineering the Future of Fashion

“It is more than just a copy and downsized model of Michelangelo’s David,” Ercolano said. “Our deep understanding of the printing process has led to a new way of processing the 3D computer model of the statue and then converting it into machine code. This slicing method enables an entirely new way to print designs with the Ceres additive micromanufacturing system.” 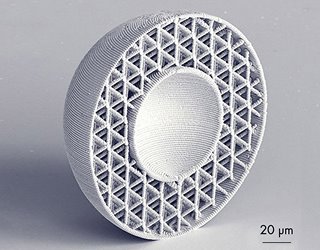 The 3D-printed lattice ball and other small metal products are intended for microelectronics. Photo: Exaddon
The Ceres printer uses electrochemical deposition to create such miniature parts. The system deposits an ionic solution—for instance, copper—through a hollow cantilever, called an iontip, with an aperture 200-times narrower than the diameter of a human hair. The solution is exactly dispensed onto a substrate within an electrolyte bath. Each printed metal unit is termed a voxel. Using an optical force-feedback mechanism, the system automatically detects when each voxel is printed, and moves on to the next one, White said.

The software accepts a comma separated value (.csv) file of voxel coordinates, which it then translates into print instructions. The .csv file is a plain-text file that contains a list of data. The files are often used for exchanging data between different applications.

The tiny David took about 12 hours to print, though something a little simpler in structure could probably be done much quicker, he said.

The company 3D printed also a tinier David, though the 0.1-millimeter tall statue presented challenges in the physical limitations of printing in metal—in other words, it somewhat lacked in detail.

You May Also Like: James Hobson Turns Fantasy to Reality

While structures can be created at the nanometer level using advanced lithography techniques, that complex process must be engineered by experts.

“This printer can take an arbitrary 3D model and spit it out in a few hours. And at room temperature,” White said.

The 3D printer can be used for research into novel applications. While Exaddon has several research collaborations, it’s mainly targeting expansion into industrial applications, primarily microelectronics. This includes semiconductor levelling, printing of terahertz antennas, and the creation of microchips and packaging.

“This is early stage technology and we see massive potential for it in those industries,” White said.

Manufacturing Blog: How to Become an Agent of Change