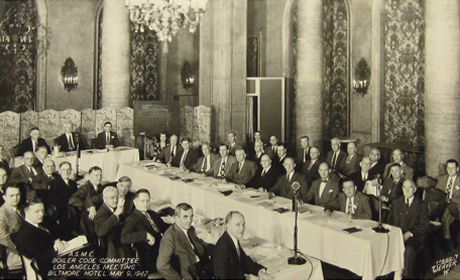 The Boiler Code Committe at the Biltmore Hotel in Los Angeles in 1947.

The True Harnessing of Steam

In April 27, 1865, the steamship Sultana was chugging up the Mississippi with more than 2,200 people on board. At 3 a.m., with the boat situated about seven miles north of Memphis, Tenn., three of the four boilers powering the craft exploded. The violent explosions caused a fire, and within 15 minutes the Sultana burned to the waterline. More than 1,500 people died.

The cause of the explosion was never determined, and a nation far too preoccupied with post-Civil War reconstruction and rising industrialization cared little about a full-scale investigation. Since consistent operating guidelines and inspections for steam pressure systems were virtually nonexistent in this period of frenetic industrial activity and commercialism, many boilers in use were unsafe.

Although it remains the worst maritime disaster in the nation's history, the Sultana explosion was not an isolated incident in the United States. Boiler explosions occurred with alarming frequency in the 19th century, with 159 occurring in 1880 alone, the year that a small group of men assembled in New York City to found the American Society of Mechanical Engineers.

Legend has it that the group came together expressly to address the problem of unsafe boilers, but the initial objectives of ASME were modest. The founders were seeking a reliable system for technical information exchange as well as a social setting.

ASME's founders were prominent machine builders and technical innovators. Erasmus Darwin Leavitt, Jr. invented more than 50 gears, pumps, and other mechanical components, and advanced the understanding of economic efficiency in pumping engines. Henry R. Worthington was another pump engine designer, who built the first duplex waterworks engine and went on to found the Worthington Pump Co. in New York City. Francis A. Pratt patented milling and gear-cutting machines and, together with Amos Whitney, created an engine manufacturing company that remains in business today. Alexander Lyman Holley, the Society's first chairman, built steel plants from Chicago to Troy, N.Y., and came to be known as the father of American steel manufacturing.

Holley and Robert Thurston, ASME's first president, were the guiding lights of the fledgling organization. Beyond seeking an improved method of information exchange, Holley and Thurston were passionate in promoting mechanical engineering as a truly sophisticated body of scientific knowledge and as an engine for America's industrial development.

Boilers at the Base

As ASME developed during the early 1880s, an increasing number of boilers were manufactured and installed to meet the needs of factory production and the fledging oil and steel industries. By 1890, there were some 100,000 boilers in service in the United States.

While boiler systems proliferated and became indispensable to the rapidly industrializing nation, unfortunately, they were not much safer. The boilers were becoming increasingly larger and more complex, and in the absence of consistent operating guidelines many users cranked up the pressure ratings in an effort to produce additional work. The steam pressure rating for a prime mover in 1890 was typically set at 80 psi, compared to 30 psi in 1850.

In ASME's first decade, more than 2,000 boilers exploded. When a fire-tube boiler in a Brockton, Mass., shoe factory exploded on March 10, 1905—killing 58 people and causing property damage in excess of $250,000—a public outcry ensued.

In those years, the U.S. government was reluctant to legislate rules and regulations for industry, so the job of standardization fell to the private sector and trade groups. Even before ASME was established in February 1880, the founders wrote papers outlining the symbiotic relationship between technical standards and a rational industrial order.

The Society's founders discussed standards for screw threads, and pump and valve dimensions during the organization's first meeting and, by 1885, were considering uniform methods of testing boilers.

Six months following the incident in 1906, ASME assembled a five-person Board of Boiler Rules, which drafted a brief document that was endorsed by the Massachusetts legislature. The rules specified pressure limits on boilers (cast-iron systems were limited to 25 psi) and included guidelines for the performance characteristics of plugs and rivets.

In 1914, ASME produced the first edition of the Boiler Code, Rules for the Construction of Stationary Boilers and for Allowable Working Pressures. The formation of the code was no smooth process. Some engineers and company officials derided the code, complaining it was too regulatory or overly complicated. Some manufacturers of boilers were opposed to limitations on steam pressure. Several railroad managers who protested against the ASME effort sought a different set of inspection requirements than those established for stationary systems. A Philadelphia engineer involved in boiler manufacturing, John C. Parker, was vehement in his opposition to the code. In a letter to the Society in 1914, Parker expressed a strong protest against further backing of the propaganda for state control of boiler design, and went on to accuse ASME of devious and underhanded dealings and attempts to sabotage his company as well as others.

Yet, for American industry, the timing of the Boiler Code was perfect. At the turn of the century, boilers of various sizes and performance capabilities were entering the marketplace, and mass production of boilers was in full swing.

The publication of the first ASME Boiler Code in 1914 was a symbolic moment in the history of the Society, an event that would help define the organization and contribute to its stature and importance in the mechanical engineering community for decades to follow.

While boiler systems proliferated and became indispensable to the rapidly industrializing nation, unfortunately, they were not much safer.