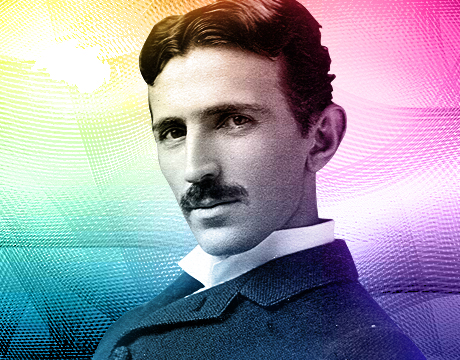 Nikola Tesla at the age of 37. Photo taken in 1893 by Napoleon Sarony.

It was an ignoble end for a self-proclaimed genius. Nikola Tesla died broke and alone (and maybe passionately in love with a pigeon) at the Hotel New Yorker in Manhattan in 1943. The prolific inventor had long been overshadowed by his rival, Thomas Edison, who had gained worldwide fame for the light bulb, the phonograph, and the motion-picture camera.

Today, more than 70 years later, there is a revival for the man responsible for alternating current and the induction motor. The name Tesla is now considered very cool.

Thomas Edison may have invented movies, and Mickey Rooney played Young Tom Edison while Spencer Tracy starred as Edison, the Man, but there hasn’t been a film about him since 1940.

Tesla, on the other hand, is something of a pop-culture phenomenon. In the 2006 Christopher Nolan film, The Prestige, rock musician David Bowie played an eccentric version of Tesla capable of building a teleportation machine.

More recently, Jim Jarmusch (director of such films as Mystery Train and Night on Earth) and composer Phil Kline have been collaborating on a “modern baroque opera,” about Tesla in New York. Bernstein Artists, Inc., the New York production company developing the project, describes the opera as “a ‘more or less’ true series of fantasies based on the incredible life of Nikola Tesla …A man has conversations with birds, invents electric ray guns, and makes a ship disappear. The reality presented will be that of dreams or memories. Or myths.”

Tesla’s even a television star. For four seasons of the SyFy series Sanctuary, a fictional version of Tesla has appeared as a part-human, part-vampire scientist.

Maybe we should have seen this coming thirty years ago, when a rock band from Sacramento, CA, named itself Tesla. Ten years later, New York City named the intersection of West 40th Street and Avenue of the Americas the Nikola Tesla Corner.

And anyone passing through can rent room 3327 at the Hotel New Yorker where Tesla died. There’s a plaque on the wall verifying it. According to rumor, this is where Tesla, in declining physical and mental health, developed a romantic attachment to an all-white female pigeon.

For those eager for more things Tesla, there is the Tesla Memorial Society of New York. Its companion website hosts a searchable database of about 4,200 pages of documents relating to Tesla published in his lifetime. It claims to include every major newspaper article on Tesla from 1886 to 1920 and provides a look at the early days of X-ray, remote control, and robotics, and also at Tesla’s efforts to develop wireless electricity.

Iwona Rudinska, editor of The Tesla Collection, says that part of Tesla’s appeal and the reason that his memory is making such a comeback today is that, “He is comparable to Steve Jobs in that he was a visionary who changed the world.”

That’s true of Edison, too.

Tesla, she added, was “not just an innovator, but a scientist whose mind operated within a philosophical framework that made his writings fascinating. He was a man who traveled his own road.”

For Further Discussion
[He] was not just an innovator, but a scientist whose mind operated within a philosophical framework that made his writings fascinating. He was a man who traveled his own road. Iwona Rudinska, The Tesla Collection