The Robotic Kitchen Is Cooking

The Robotic Kitchen Is Cooking 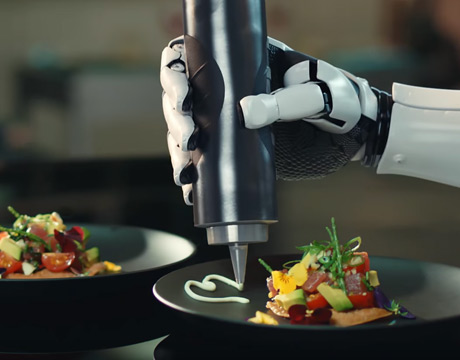 The robotic kitchen could one day be able to create a variety of world-class dishes for the domestic kitchen and other preparation areas. Image: Moley Robotics

Depictions of the future in pop culture have always included food produced instantly by a robotic chef or automated machinery. Just think of Jane Jetson pushing in a punch card for “Pizza” or “Fried Chicken” and having it pop out fully cooked seconds later, and you get the idea. The goal of Moley Robotics, London, UK, may not be that cartoonish, but they are aiming to produce a consumer version of a robotic kitchen that will allow you to order food on your mobile device and have it ready and waiting when you arrive home.

Mark Cutkosky, professor of mechanical engineering at Stanford University and Co-CTO of the company, says the key to their robotic kitchen is the hood that encapsulates the unit, and what it contains.

“Two robotic arms come out and do the cooking with the help of tools it can handle,” he says. “It doesn’t work to have a freewheeling Jetsons robot flying around the kitchen but instead a specialized countertop where robots are built in. In [company founder and CEO] Mark Oleynik's thoughts, the robot is tucked underneath the hood and there is looping back and forth, picking up what’s needed from the countertop.”

There is a general feeling I think that food preparation in many ways can be a good fit for robotic implementation. Mark Cutkosky, CTO, Moley Robotics 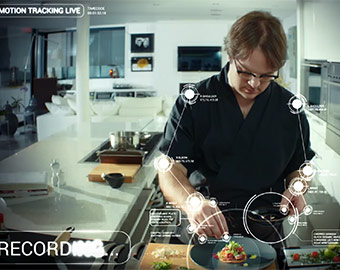 A motion-capture system allows the robotic kitchen to replicate the actions of a master chef. Image: Moley Robotics

In the demo version of the kitchen, the arms are made up of sensors and actuators, with the primary materials being stainless steel and carbon fiber. The hands have three fingers with two joints each.

“It can work because you can adapt containers and other cooking-related items for the robot to work with,” Cutkosky explains. “The arm is standard with six or possibly seven degrees of freedom. The robot arms function and go back and forth on a linear track, and it’s belt driven.”

Future improvements would involve integrating contact sensors, force torque sensors, and possibly proximity sensors, he says. “For example, if working over the countertop where people can already reach into that space, the robot needs to know the instant they’ve contacted something,” he says.

The size of the demo unit is about 6 feet long by 2.5 feet deep, occupies one whole wall of a kitchen, and includes counters and drawers, a built-in range, and more.

“Some sensors and the software to help drive this were done by monitoring and recoding then mapping to the robot arm,” Cutkosky says. “For the consumer version, to make it work, it needs to get lighter, have less expensive materials, have more sensing, and it may turn out in the long run that specializing is needed for certain types of kitchens.”

Ideally, the system will align with a service that will provide pre-prepared ingredients in containers that the robot can access to make what is needed.

The ultimate goal isn’t just to save time but health, as the average family is going out to eat more than in generations past, a situation that can make it more challenging to eat nutritionally.

“There is a general feeling I think, that food preparation in many ways can be a good fit for robotic implementation,” he says. “For example, the start-up company called Momentum Machines has the vision of made-to-order gourmet hamburgers. Or a robotic pizza delivery truck from Zume, where delivery trucks are making pizza on the drive to your house so it’s even fresher. The way we think of food preparation could really change.”