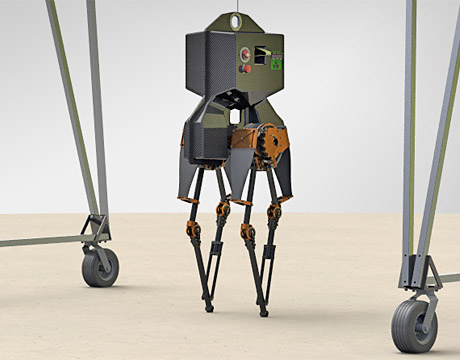 Jonathan Hurst, associate professor in the school of mechanical, industrial and manufacturing engineering at Oregon State University, has been involved in locomotion for as long as he can remember.

“Legos, the robotics club growing up, Carnegie Mellon,” he says. “I’ve always been obsessed with the subject.” He’d have to be. Trying to make robots walk like people takes time, and an acceptance of repeated failure.

By Hurst’s assessment, the one he’s working on now, ATRIAS, is the first machine to reproduce the basic physics of human walking.

“ATRIAS is a bipedal robot that I think is on its way to showing us the future,” says Hurst, who previously worked on a bipedal robot named MABEL at Carnegie Mellon University. “We’re not trying to build a product to go in people’s homes with this. ATRIAS is both a demonstration in the real world—something that only existed in theory—but more importantly a learning platform.”

Testing has had its share of positives and negatives. “It would take a couple of steps and fall,” he says. “But it’s improved over time. It’s been able to do well in stepping up and stepping down. I will also say that we didn’t originally think about the turning, but that was one of the reasons it falls, because the orientation of the robot and the direction it's going don’t match.”

Inspired by the motion of animals, the key is for the roughly 160-pound robot, which has six motors, to be able to keep its balance.

Distributed around the robot are the microcontroller boards they made. “Each one of them locally picks up and interfaces with local sensors such as the encoders on the motors,” he says. The amplifiers are Elmo motion control, with two motors on each leg, and there’s a harmonic drive transmission on each of those. Motors are at the hip, with both motors cooperating to extend the legs.

Leg design is analogous in many ways to a “Pick and Place” machine, he says. “We’re trying to match a theoretical model which is a spring mass model,” he says. “To do that when it impacts the ground you need low mass and low inertia. It has a safety tether on it because, if the robot falls, it breaks badly and the team doesn’t want to [constantly] repair it.”

Some of the future applications from this work could be limbs for those who are physically challenged or robotically delivering packages to your front door. “Robots can assist us far more than they do now,” he says. “It’s exciting to see where the technology is heading.”

But Hurst again reminds that ATRIAS, powered by a lithium polymer battery, is still about exploration. “It’s not an application-oriented machine. ATRIAS is both a demonstration of something that once only existed in theory but, more importantly, a platform for further investigation.”

ATRIAS is both a demonstration in the real world—something that only existed in theory—but more importantly a learning platform.Prof. Jonathan Hurst, Orgeon State University