Where the Robot Meets the Road

Where the Robot Meets the Road 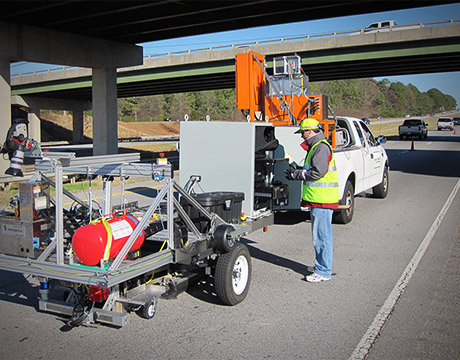 One of the great inventions we take for granted is right beneath our feet—and often beneath our wheels. Roads have gone from simple, narrow paths to intricate infrastructure systems connecting states, countries, and even continents.

Still, though they may look strong, they age, and they crack. Filling in those cracks can be a long, expensive challenge. The Georgia Tech Research Institute has been working on a system that travels a different path, and might give the world’s roads a healthier future.

Named Roadbot, this system utilizes features such as stereo camera technology and light-emitting diodes to identify cracks and fill them with the aid of a multi-nozzle system.

“Originally, the thought was doing it with a dot matrix approach, and even the GDOT [Georgia Department of Transportation] ended up getting involved,” says Jonathan Holmes, senior researcher at the Georgia Tech Research Institute. “We have been able to test Roadbot over a few miles but we want to find a partner to expand it to many miles.”

The Roadbot extends the life of roads by slowing down the aging process, says Holmes, adding that it may extend the lifespan of the average road from six to eight years to possibly nine to eleven years.

It starts with a camera detecting the images, like a flashlight, he says. “As you change the angle of a flashlight, you can highlight some features as shadow is cast,” he says. “As a camera sees the shadows, we distinguish between good pavement and cracks with machine vision-processing algorithms. You then generate a ‘pixilized’ map where the camera takes a picture to find the cracks. The next piece is transferring the information, such as coordinating transformation going from the image frame of the camera to where the physical system is.”

The physical system is an array of nozzles that are charged with very high, pressure-heated asphalt, he says.

“They are waiting to turn on when they drive over the crack,” he says. “So when this [system] is pulled down the road, the movement of the truck allows the system to move forward following the road. Once this coordinate system transformation is made from the camera to the crack-sealing system, with the hardware doing its work, then they are able to fire at the right time. From this, you get this asphalt that’s been shot at high pressure, high velocity into the cracks and that’s ultimately how the crack is filled.”

Fast to the Filling

The time between getting the picture of the crack and the hardware filling the crack is actually only about a tenth of a second, Holmes says. There’s also a small accumulator for each nozzle. “If you’re driving down the road and there’s one crack and all nozzles fire at the same time then you have a pressure drop in the system and the nozzle farthest away from the pump won’t fire well. Instead, you have individual accumulators for each nozzle. You have a very small volume that goes with each nozzle and is spring loaded and charged on its own.”

Holmes believes the Roadbot has the ability to make quite a difference and it identifies approximately 90% of cracks at present.

“A road wears down where predominant contributors are changes between earth and asphalt,” he says. “It can heat up in a day and cool down in a night. You have stress fractures. And freezing expands the cracks also. Many things are working against the road but hopefully we can put this to work to help it.”

Many things are working against the road but hopefully we can put this to work to help it.Jonathan Holmes, Georgia Tech Research Institute