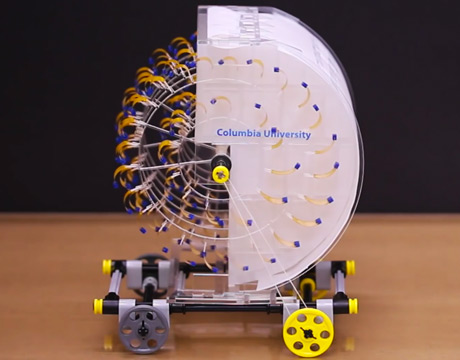 The Power of Evaporation

Evaporation is an overlooked source of alternative energy that, with the right technology, could become more plentiful and reliable than solar or wind power. Researchers at Columbia University are at the forefront of trying to turn this idea into a reality.

In 2015, the team of scientists, led by biophysics professor Ozgur Sahin, developed several prototype devices that successfully generated energy from the natural process of evaporation. The devices rely on bacterial spores that expand and contract as they absorb and release evaporating moisture.The mechanical energy from this motion is then converted into small amounts of renewable electricity, enough to light up LEDs or power a small toy car.

In a recent paper in Nature Communications, Sahin estimates that with ideal conditions and scaled-up versions of their technology, evaporation from U.S. lakes and reservoirs could theoretically supply nearly 70 percent of the country’s electricity needs or more than300 gigawatts of power every year.For example, tens of thousands of these interconnected devices could float on top of lakes and reservoirs, using bacterial spores to generate electricity.

How the System Works

One of these spore devices—the “evaporation engine”—consists of plastic strips coated with water-absorbing spores from the soil bacteriumB. subtilis. Changes in humidity prompt the bacterial spores to expand and contract. “They do this with a lot of strength,” says Sahin. “When this happens, the strips elongate and shorten in response. They’re essentially working like a muscle, and that energy can be converted into electricity.”

Although humidity itself does not tend to change rapidly in the natural environment, there is enough evaporation coming from open-water surfaces to be harnessed by his devices. “The way we do this is we put the strips below shutters,” says Sahin. “When the shutters open up, they can let moisture go through. When these shutters are closed, they block moisture.” When multiple spore-coated strips are put together, he notes, the piston-like system can be tied to a generator to produce power.

This proof-of-concept experiment is a critical first step. Larger-scale systems will require fewer moving components to maximize implementation. “One goal is to make something sheet-like out of the spore material, so these sheets can expand and contract on a surface area,” says Sahin. “The final material could produce a significant amount of power.”

In addition to creating energy, evaporation technology can save water. Sahin estimates that half of the water naturally lost from lakes and reservoirs through evaporation could be saved during the energy-harvesting process. By his calculations, this is about 25 trillion gallons a year, or about one-fifth of the water Americans consume. This would be especially valuable for water-sensitive cities with growing populations, especially in the southwestern US.

"Another interesting property we realized is that by slowing down evaporation, we can raise the temperature of water, effectively storing energy as heat that can be later released on demand," points out fellow researcher Ahmet-Hamdi Cavusoglu. "Depending on the local weather conditions, we could release this stored energy rapidly as additional evaporation to match fluctuations in electrical energy demand. This would be similar to how hydroelectric dams vary their power output by changing the flow rate of water through the dam."

There are, however, environmental concerns. Slowing the amount of direct evaporation from a body of water could change water temperatures, negatively impacting aquatic life. Covering parts of a lake’s surface with these engines could further reduce water temperatures by blocking sunlight. Less sunlight reduces algae levels, which in turn reduces oxygen levels, possibly resulting in fish die-offs.

The team is researching how to make better spore-based materials and build larger engine prototypes.

“No one previously has provided an estimate as to how powerful evaporation could be,” says Cavusoglu. “We hope our work will provide added motivation for future research and development on this evolving class of materials.”

For Further Discussion
We hope our work will provide added motivation for future research and development on this evolving class of materials. Prof. Ahmet-Hamdi Cavusoglu, Columbia University