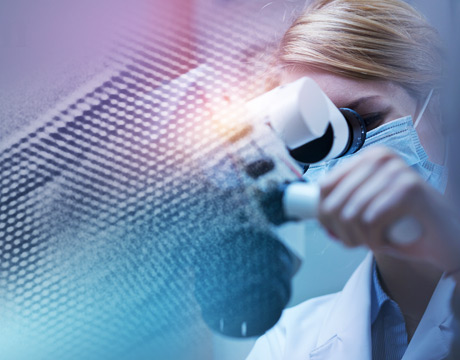 The Nano Structure of Enamel

Cavities are on the rise. If you’re an adult you’ve probably got one now. The World Health Organization says nearly 100 percent of adults suffer from them. And some 60 to 90 percent of children have them, too.

Yes, we can blame it on the soda, the candy, the chocolate-chip scones, and what have you. But to really get in there and fix the problem, we have to know how and why these things penetrate enamel. And to understand that, you have to understand enamel.

Julie Cairney, a professor of material and structures engineering at Australia’s University of Sydney, has managed to take a good look at the hard shiny stuff at the atomic level using a new microscopy technique. Atom probe tomography, as it’s known, “allows us to reconstruct exact positions of atoms within matter,” says Cairney.

The process is somewhat painstaking. First, a piece of enamel is harvested and, using an ion beam, molded into the shape of a needle. Then a field is applied to the hemispherical tip and atoms are plucked off one by one, over a period of five to six hours. Knowing the time of flight and the angle at which it flew, Cairney and her team can back-calculate to determine the initial position of the atoms. “We use algorithms to see which atoms are sitting where, but it’s real data from a real sample,” she says.

Those algorithms showed that enamel is made of ribbon-like nanowires of hydroxyapatite that come in bundles of approximately 40,000. Between these bundles are magnesium rich areas. Though dental researchers have long hypothesized such a “magnesium rich phase,” this is the first confirmation of its existence. What was unusual was the heterogeneous nature of the magnesium rich areas between the highly complex and highly structured bundles. “We were able to say unambiguously that there was magnesium between the rods,” says Cairney. “Then we had to work with dentistry experts to see how that related to decay.”

Tooth enamel is not a static shield, protecting teeth until wear, tear, and Twinkies break it down. Enamel is constantly demineralizing and re-mineralizing. But just how this process occurs has long eluded investigators. Now, with Cairney’s work in hand, they’ll be able to better understand the process and create new materials to increase re-mineralization. “I would imagine that there could be a dietary link,” she says.

Cairney was inspired by a similar study done at Northwestern that looked at rat tooth enamel. Having moved to the human she has likely helped dental health the world over. But many questions remain unanswered. For instance, do children, who suffer a much greater proportion of cavities, have significantly different enamel? To answer that question, Cairney is turning to her seven-year-old son. “He’s expecting a tooth out any day,” she says. “I would be interested to see if there is a higher proportion of magnesium in juvenile enamel, but we will see. I have to beat the tooth fairy to the sample.”

After experimenting on her child, Cairney may turn to examining areas of decay. Such an investigation may be a bit trickier, however. Atom probe tomography works best on very dense stuff and a piece of decayed tooth may be a bit too holey on the atomic scale as well as the macro.

But any effort to make toothaches—and visits to the dentist—a thing of the past is likely to be applauded by engineers and eaters everywhere.

For Further Discussion
We use algorithms to see which atoms are sitting where, but it’s real data from a real sample.Prof. Julie Cairney, Australia’s University of Sydney