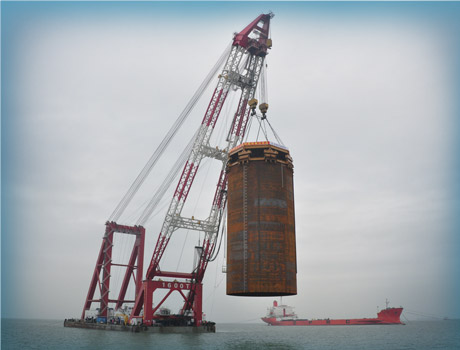 China's pell-mell rush to development is producing many of the world's largest and most expensive infrastructure and building projects ever conceived. From the 21,000-MW Three Gorges Dam to Beijing's landmark CCTV building, Chinese projects are stretching the boundaries of design and the machines needed to construct them. To build the $10.7-billion link connecting Hong Kong, Zhuhai, and Macau in South China's Pearl River Delta, project officials needed more than one of the world's most powerful pile drivers to push mammoth 72-foot-diameter steel piles. They needed eight of them, linked together and synchronized as one unit.

Dubbed the "Octo-Kong," the device connects eight vibratory pile drivers each driven by their own CAT 1,200-hp engine. The hammers are structurally, mechanically, and hydraulically connected to provide enough force to drive 120 of the giant 130-foot-long piles, each weighing 600 metric tons. Project officials say the piles are the largest ever driven.

In an innovation in cofferdam construction, the piles form bulkheads for two artificial islands that are transition structures between the link's 4.2-mile-long tunnel and three cable-stayed bridges that will connect Hong Kong to Macau and Zhuhai, on the Chinese mainland. The tunnel will allow deep-water ships to pass from the South China Sea to the delta.

"The biggest risk was in [the Octo-Kong] getting out of sync," says White. "If you let it get out of sync, there's just a lot of force working in the wrong direction."

Working at sea, the giant vibratory hammer is hung from a barge-mounted crane. The hammer is fitted to the top of the pile and lifted into position. Because of its enormous size, the pile sinks into the seabed under its own weight, but only to a point. Then the hammer takes over (see video of the process).

Vibratory hammers work by doing exactly that: vibrating in an up-and-down movement at very high frequencies. Rubber suppressors mounted on top of the gearbox dampen the vibration to the crane line. Standard hammer pile drivers pound the piles into the ground. Vibratory hammers work faster and quieter.

"The key is that this has to be thought of as one unit," says White of the eight-hammer configuration. "Pressure had to be equal at all times on all of the hydraulic motors, so you have to connect it as one circuit."

Precision in operation was paramount. White says there is only 1/300th of a second margin of error. Anything more and the pile driver will be out of synchronization.

APE designed the multi-unit hammer with mechanical as well as hydraulic connection to account for startup and shut down operations. "They're linked mechanically through a shaft … to keep the machine in time during startup and shutdown," he notes. "It's hard to get equal hydraulic flow over eight units so the mechanical connection can be used to overcome that [at startup] until the hydraulics kick in. And as soon as you shut the machine off, there's no hydraulic oil being pumped, so the switch to mechanical smooths things out."

White and APE drove the last of the piles in December 2011 after driving the first In April. They shaved seven months off of the construction schedule with their blistering pace, proving their method.

The artificial islands' seawalls each comprise 60 individual adjoining cells, each adjoined by wingwalls, in order to form to perimeter of the island. Traditional construction methods of the bulkheads would have taken years, with each cell having to be fabricated individually by driving one interlocking sheet pile at a time to form each cell, and each cell constructed to adjoin the next until the island wall perimeter was closed. A construction method driving the cells as individual massive steel piles had never been tried on this scale in these conditions.

APE relied on Excel Gear Inc., Roscoe, IL, to manufacture the gearboxes in just 10 weeks. They are the most critical component because they regulate the timing on the vibratory power transmission. The unit is designed to rely on the precision of the gears, so timing of the gearboxes was critical, especially in achieving the timing specification of 0.005 inch.

White says the biggest learning curve was in operating the machine, and driving such a large pile to such tight tolerances in differing soils. "With something this large, if one side of the pile enters a type of soil before the other, there is a tendency for the pile to lean toward the soil that is softer," he says. In most jobs, the method of correction is to lift the pile up and start again. That wasn't possible on this job because of the size and working from a barge. "When you pull up, the barge tends to go down, so pulling is not an option on the water. The challenge was in not ever going through one soil type."

The key is that this has to be thought of as one unit. Pressure had to be equal at all times on all the hydraulic motors so you have to connect it as one circuit.Dan White, American Piledriving Equipment Inc.