The Man Behind the Vacuum Cleaner

The Man Behind the Vacuum Cleaner 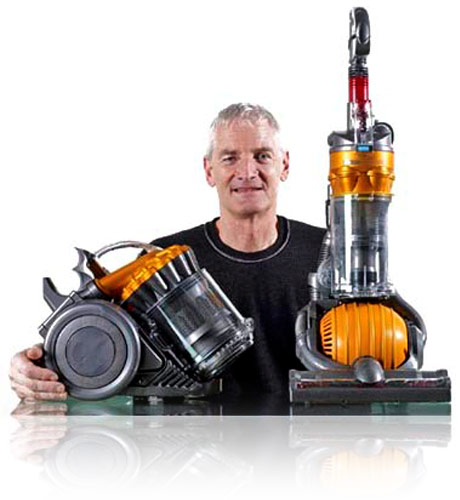 When Dyson customer and homeowner Caryn Solomon of Lagrangeville, NY, tested the DC Series Dyson vacuum cleaner for the first time, she marveled at its ability to steer around tables and chairs. “I knew right away that I had to own one of those vacuum cleaners,” she says.

What soldSolomon on the machine is The Ball, Dyson’s solution to the restricted forward and backward movement of the conventional upright vacuum cleaner. Instead of four fixed wheels, the Dyson rides on a glass-reinforced polypropylene ball, enabling easier steering and improved maneuverability. Dyson’s Ball technology, few would argue, is one of the most innovative product designs to enter the consumer marketplace in the last few years.

Behind the Dyson vacuum cleaner is a man and company that place engineering and innovation front and center in the corporate mission. To British-born James Dyson, innovation is the end product of thinking, testing, experimenting, researching – and good old-fashioned hard work and perseverance. In designing the suction capability of the DC Series vacuum cleaner, Dyson developed a total of 5,127 patents over five years, before arriving at the Root Cyclone technology that spins dirt out of the air rather than relying on bags and filters to trap debris.

At Dyson headquarters in Wiltshire, UK, 600 engineers are busy each day developing new ideas and technology. The engineers disassemble and reassemble the vacuum cleaners and other Dyson products, test components, and carry out other tasks in a search for continuous improvement. In addition to vacuum cleaners, the company makes washing machines, fans, heaters, and hand dryers. The AB01 hand dryer is another technology innovation, featuring a digital motor that produces a high-speed sheet of cool air that dries hands in twelve seconds, while using less energy than conventional warm-air systems.

To spur innovation, Dyson groups his engineers together in one space, mingling product designers and technical specialists, creating a workspace that fosters communication and the free flow of concepts and ideas. James Dyson has infused risk-taking in the DNA of the company, believing that risk is an essential building block for innovation and invention. “To compete, countries must take risks,” Dyson said recently. “Without taking risks, you don’t generate long-term wealth.”

James Dyson was born in 1947 in Cromer, Norfolk, UK. In 1966, he enrolled in the esteemed Royal College of Art in London, where Dyson initially studied architecture and interior design before moving into engineering. He developed several products and systems for the maritime industry while at the Royal College of Art, including a high-speed landing craft and a boat-launching device. Later, Dyson developed an innovation of the wheelbarrow, featuring a large pneumatic ball enabling maneuverability in mud and wet sand.

To Dyson, engineering is all about invention. Through his four years of education and training at the Royal College of Art and into professional practice, he displayed a keen passion for mastering how things work – and how certain things can work better. An innate problem solver, Dyson developed the basic concept for the Root Cyclone technology in his vacuum cleaners on a visit to a saw mill. There, he observed the large cyclone atop the roof of the mill spinning sawdust out of the air and collecting it in a chamber, and he began to think about adapting the process to vacuum cleaners. The DC Series vacuum cleaners feature three stages of cyclonic separation and powerful centrifugal forces and air velocity to capture the smallest particles of dust.

While growing a successful global company and amassing a $1-billion personal fortune, James Dyson has become a tireless advocate for technology-based economic development. He believes governments have an important role to play in inspiring innovation, and in the U.S., he has called for government-supported investments in technology projects, particularly in infrastructure and energy.

Dyson also believes there is a shortage of engineers necessary to boost economic growth. “If we are to have an economy which features a greater amount of technocratic horsepower, then the supply of young people who set their sights on becoming engineers needs to be increased,” he said.

To make a difference in this area, Dyson in 2002 established the James Dyson Foundation, which aims to inspire young people to study engineering and enter the workforce as engineers. Although the focus of the foundation is on supporting education in Great Britain, the institution has broadened its reach internationally and is becoming active in the U.S. In July 2011, the foundation hosted a design workshop for middle school students at the Sir Miles Davis Academy in Chicago, IL,site of the company’s U.S. headquarters. In the program, engineering mentors demonstrated the processes involved in 3-D printing and robotics design, and introduced Dyson’s Engineering Box, a training tool that challenges young people to dismantle and reassemble mechanical devices.

Like ASME, James Dyson is committed to education outreach – instilling the seeds of creativity and ingenuity in young minds to grow the next generation of engineers and innovators. Today, a household vacuum cleaner that performs unlike any other…tomorrow, who knows?