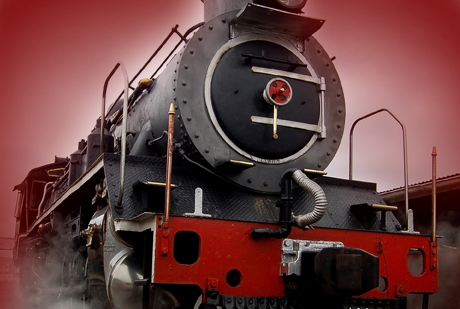 The Lost Era of Steam Travel

They were called iron horses, a moniker suggesting indestructability, but these 400-ton machines were very prone to wear and tear. In fact, the behemoths required plenty of tender loving care.

And so for more than 50 years the great steam locomotives came, chugging in to a Southern Railway repair yard sprawled over 141 acres in Spencer, North Carolina, about 30 miles southwest of Winston-Salem.

The facility at Spencer, constructed in 1896 and featuring a massive roundhouse, was one of hundreds of railroad back shops that dotted the American landscape during the heyday of steam travel in the mid-nineteenth century and into the turn of the twentieth century. While not uncommon in its time, the Spencer shops stand out today as “one of the largest remaining original examples of the final era of roundhouse construction,” according to ASME, which recently named the facility a Historic Mechanical Engineering Landmark.

Samuel Spencer saw the need for a large maintenance shop situated somewhere between the company’s existing repair shops in Atlanta and Washington, D.C. Such a facility, Spencer reasoned, would enable the company to service and swap out its locomotives at short intervals along the busy eastern line, dividing the Washington to Atlanta run into four segments of about 160 miles each.

Construction of the Spencer shops began in March 1896 and the facility was operational six months later. Spencer was a huge complex of shops, administrative buildings, lots, storage areas, and railroad spurs and sidings, reflecting the requirements of the growing company.

The original facility included a semicircular roundhouse with 15 bays. It was here that Southern’s steam-driven locomotives received routine light maintenance. Crews in the roundhouse performed brake work, gear adjustments, boiler washouts, grease jobs, inspections, and other tasks necessary to keep the company’s rolling stock in continuous operation. In 1924, the roundhouse at Spencer was expanded to 37 stalls, each one 106 feet deep.

Since steam locomotives were unable to back out of these stalls, engineers designed and built a rotating turntable that enabled the engines to face in the direction they would exit the roundhouse. The turntable, which rotated 360 degrees about a center spindle, was supported at each end by wheels rolling on a circular rail set in a concrete pit. A pair of electric motors set the turntable in motion.

The facility also included shops for major repair work. Some of these shops were able to accommodate the complete disassembly of a locomotive. Need a part? No problem. Spencer included a machine shop where any part could be cast, forged, and milled on spec. There was no outsourcing of work at Spencer.

In peak periods, Southern operated three shifts at 24 hours around the clock at Spencer, retaining a workforce of 3000 repairmen and other employees.

One of them was Clifford E. Spears, who worked as a boilermaker at Spencer from 1942 to 1960. Spears, now 87 years old and still living in Spencer, recalls the bustle of the rail yard, with trains continuously entering and leaving the shops.

“All the stalls in the roundhouse would be occupied,” said Spears, whose job was to weld joints and seams and perform other tasks to make the boilers on the locomotives steam-tight. “After the repair work was carried out, inspections were done. Engines that passed inspection were rolled out and placed back into service. Engines requiring major repairs were taken to the other shops, where workers removed the running gears and cranes set the locomotives on wooden blocks. The equipment remained in certain shops depending on the extent of the repair work.”

Diesel locomotives began arriving at Spencer in 1941, prompting officials at Southern Railway to retrofit the roundhouse to meet the requirements of the new engines. Nine stalls were extended to accommodate the longer, multi-unit diesels, and new sections were added to service batteries, fuel injectors, and other components of the new locomotives.

By 1953, the company had taken all its steam locomotives off the rails, marking the end of an era at the Spencer shops. Clifford Spears recalls that the job skills of the boilermakers and pipefitters became obsolete, while the mechanics with knowledge of electrical components became valued assets.

While Southern continued to service part of its fleet of diesel locomotives at Spencer into the 1960s, much of the heavy repair work had ceased years earlier and by the latter 1970s, the great train yard had reached the end days. The facility was abandoned in 1977, its roundhouse and shops mothballed.

Southern Railway’s Spencer shops could have become part of America’s Rust Belt, a relic, a symbol of a forgotten period in the nation’s gritty industrial past. The government of North Carolina, however, saw the facility as much more, as a link to the state’s history and heritage. In 1979, the North Carolina Department of Cultural Resources in collaboration with the North Carolina Transportation History Corporation launched a campaign to restore the facility. Funds were raised to refurbish the roundhouse and turntable, which opened to the public in 1996.

Today, the North Carolina Transportation Museum occupies part of the old Spencer shops and uses the roundhouse to display its collection of rolling stock.

All the stalls in the roundhouse would be occupied. After the repair work was carried out, inspections were done. Engines that passed inspection were rolled out and placed back into service.”Clifford E. Spears, Boilermaker, Southern Railway’s Spencer Shops