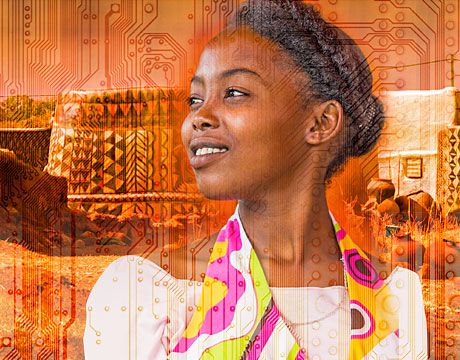 Wirelessly connected sensors, actuators, and other hardware have already changed global development work—and signs point to bigger changes to come. A report by the International Telecommunication Union and Cisco Systems, called Harnessing the Internet of Things for Global Development, cites estimates that there may be 25 billion networked devices worldwide by 2020, or as many as 50 billion if you count RFID tags.

It’s not a surprise that there will be a proliferation of sensors in the developing world, given that more people in those countries have access to 2G cellular network coverage than to basic services like electricity, sanitation, and clean water. What is surprising is the creative variety of applications that are already deployed.

Connected devices and Big Data analytics are monitoring farms, wildlife, air pollution, stove usage, movements of populations during disasters, epidemics, and even trends in people’s moods through the words they use in tweets.

Houlin Zhao, secretary-general of ITU, wrote in the report's introduction that there are tradeoffs implicit in the technology. Increased monitoring could threaten privacy and safety, for example. Threats include “gaps between technical security and users’ perceptions of security and trust, or the detailed information yielded by geolocalization technologies,” Zhao wrote. “Moreover, the purpose for which technology and applications are developed does not always end up as the sole—or even major—purpose for which they are actually used.”

With these cautions in mind, the technology is progressing in interesting ways. Here are some development engineering projects that take advantage of the Internet of Things today.

Los Angeles-based Nexleaf Analytics monitors the temperature of vaccines during transport to rural clinics in India. A thermometer device uploads data to the cloud in close to real time via a cell phone text- or data-messaging system. A server then sends updates and warnings when the temperature hits certain thresholds.

In Bangladesh, a team at the Robotic Embedded Systems Laboratory of the University of Southern California tested a network of 48 manual arsenic biosensors to monitor water quality.

In Kenya, a team from Oxford University affixed basic accelerometers (similar to those found in a mobile phone) to water pump handles to monitor usage. A transmitter fits into the pump handle to deliver data via SMS.

Portland State University’s SWEETLab has produced sensors used in a variety of projects, including water pumps in Kenya, cookstoves in India, latrines in Bangladesh, and water filters for hand-washing stations in Indonesia.

The Syngenta Foundation of Basel, Switzerland, has deployed connected micro-weather stations through its Kilimo Salama (“safe farming” in Swahili) project. The stations monitor temperature and moisture in the air and soil, solar radiation, wind speed, and other factors, and transmit that information to insurance firms, which plug it into digital models that estimate losses after weather events. The insurance firms make mobile payments to the farmers based on the models, automating and speeding the claims process.

In India, 20,000 smallholder farmers use Nano Ganesh, a 2G-phone-operated unit that attaches to the pump of a drip irrigation system. An actuator operated by the phone turns the pump on and off. The farmer can see if the pump is getting electricity and if water is available.

Following the 2004 Indian Ocean tsunami, the Indian Ocean Tsunami Warning System was created using kinetic sensors on the ocean floor. The sensors measure waves and water flow, and transmit warnings about potential tsunamis to disk buoys floating on the ocean surface. The buoys upload the information to government authorities via satellite.

Similarly, the Red Cross is experimenting with low-cost, solar-powered fire alarm systems in slums in Nairobi and Cape Town. The network sounds alarms and sends text messages to the residents and authorities, and uses GPS to locate the fire.

M-Kopa in Kenya built its business around networked devices. The company installs solar home systems at a discount and charges households for the amount of electricity that they use. The system cuts off the power if the meter runs out, and users can buy more with mobile payments. M-Kopa can remotely monitor the health of its systems and make repairs as needed.

Rob Goodier is the editor of Engineering for Change.

It’s not a surprise that there will be a proliferation of sensors in the developing world. What is surprising is the creative variety of applications that are already deployed.